With the Earth in the grips of a spreading disease and resources starting to run low, scientist Karl D’Branin (Eoin Macken) manages to get enough support to fly a team on an a exploratory mission to the edges of the solar system and to see if he can make target with an object that appears to moving in ways that suggest some sort of intelligent control.  D’Branin’s premise is that the anomaly could be mankind’s first contact and could be their last hope at cosmic assistance.

But few people, least of all the Nightflyer’s often holographically-projected Captain Roy Eris (David Ajala), are totally convinced by his theories and the crew of the Nightflyer are largely ambivalent about D’Branin’s presence – and even angry that his team includes a dangerously unstable telepath named Thale (Sam Strike) and his ‘handler’ Dr. Agatha Matheson (Gretchen Mol).

As various crewmembers begin to experience strange and horrifying visions, all suspicions turn towards Thale and he does little to persuade anyone otherwise. But what if he isn’t the only threat. What if the crew of the Nighflyer have a danger far closer to home?

For a story about humans trying to explore new territory there’s an awful sense of ‘we’ve been here before’ to SyFy‘s new mini-series (available weekly on the tv channel and more quickly and just as legitimately, online).  The idea of mankind’s desire to reach out when he should be ‘reaching in’ is hardly a new one and some of the greatest thrillers have used physical journeys into the unknown to explore psychological ones (and vice versa).  There’s often a danger that the result is just chaotic mood music, a cacophony of ideas that swirl around without ever coalescing into something more… tangible. Story-tellers run the risk of stroking their chins and muttering about the ‘inexplicable’ as an excuse to not explain or to paint themselves into corners from which they can’t walk away (but somehow do).  Terror and tension can be interestingly and attractively abstract – often what we glimpse or imagine  is more scary than what we see – but if you’re asked to invest many hours in a story rather than a handful of minutes, you need to feel some sort of purpose and progress.

Martin’s Game of Thrones is truly epic, taking the timeless mix of dynasties and duplicity and spinning out a story in which the viewer aches to see the triumphs, tragedies and  retribution play out – it’s the most satisfying of guilty pleasures. But HBO‘s show is based on a multi-volume, almost generational journey (one, notably,yet to be finished on the printed page) and the fact that Nightflyers is based on a short novella is a telling difference meaning the screen version of the latter has to do far more with far less. Having to adapt source material to a new medium is a tricky task – expanding it out to do so is even more problematic.

Though the original Nightflyers story was released in 1980, this mini-series from SyFy positively screams Event Horizon, the 1997 film which found itself adrift in space with the same central story concept and collection of strengths and weaknesses. The film had the benefit/restriction of running to less than two hours, but Nightflyers‘ running time will take it to over ten and that means there’s a lot of space for groundwork and exposition in its first hour.  To some extent it does that well enough – introducing us, briefly, to this universe with a murderous bang and multiple killings and then whisking us back to start the procedure of showing how we got there. There’s talk of worldwide illness, of attempts to save humanity, the preferences and prejudices of people confined into small spaces and the perhaps entirely reasonable fears of something ‘other’.

The second hour works a bit better, adding a few more faces and encounters to fill out the space and giving some further backstories to the characters we’ve already met but by the time the credits roll, the story really hasn’t moved forwards. The third hour cranks up the conspiratorial tone and finishes with a major – and somewhat spooky – revelation, but there’s still the argument that the content is more about atmosphere than story progress.

Nightflyers has much to work with and if you discount the pedigree and expectation involved, it’s decent if not actually remarkable. The cinematography  and production design, two important elements, are suitably disconcerting. Clearly some thought has gone into the environment and the way the characters and the audience traverse it – maybe moreso than the script. The ensemble acting is fine – the likes of Gretchen Mol (as Dr. Matheson) and Angus Sampson (as Rowan) make a significant impact in the opening Shining-esque intro and the episodes then introduce us to troubled leading men and statuesque female personnel that feel like Westeros-lite. The camera shoots Melantha Jhirl’s (Jodie Turner-Smith) and her naked curves in an R-rated remit, but edits with a PG-13 result. Still, her relationship with the quiet and almost androgynous Lommie (Maya Eshet) is the most interesting dynamic here.

But the full package never quite seems to be able to put its finger on what it wants to do.  It’s shock without the awe. The Haunting of Hill House shows what can be done when all departments are the masters of their craft and all decide to commit to something big and build it up from intricate parts, but here the story feels ambitious but shapeless – like a sculptor trying to blueprint a storm: you can plot a general trajectory and provide the thunder and lightning but it’s shape never stays long enough to define. This is mini-series that essentially puts Event Horizon, 2001: A Space Odyssey, Solaris and Carrie into an all-Kubrick-embracing blender and flips the horizontal hold.

Ultimately, the show gets better as it goes along, but the question will be whether people will stick around for that. Casual viewers will find it interesting enough, sci-fi/horror aficionados will curl up with some popcorn, shrug and mentally list  the superior inspirations and Game of Thrones fans will likely be somewhat disappointed. Without the George R R Martin link, one suspects this would be getting far less coverage.

The Nightflyers manage the take-off and spotlights the turbulence, but so far they’ve yet to soar or boldly go anywhere we haven’t been before. 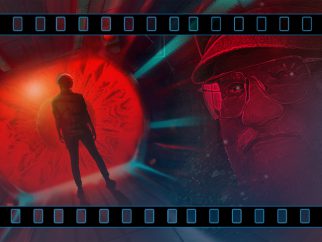 Marvel: The Avengers reach their ‘Endgame’…