It could have been a dry history lesson or a case of 'wacky racists', but Spike Lee's latest could be heading for an Oscar...

It’s the early 1970s and Ron Stallworth (John David Washington) makes the fateful decision to join the Colorado Springs Police Department. He will be their first black police-officer and though the Powers-That-Be seem to actively discourage him, he’s determined to make a difference, even if it means starting in the filing room.  Later, given his skin-colour, he’s given the job of keeping tabs on ex-Black Panther leader Stokley Carmichael (Corey Hawkins) who is giving a talk at the university and whom they fear will stir up the crowds to further violence. Stallworth flirts with organiser Patrice (Laura Harrier) without revealing his undercover status but reports back to his bosses that while Carmichel’s zeal could be problematic, there’s no sign the crowds were anything but energised rather than inflamed.  Stallworth also decides to do some research on other agitants, namely the local order of the KKK and casually answers a newspaper advert offering a phone number for those interested in joining. Instead of receiving the obligatory bumph and literature, Stallworth suddenly finds himself on the phone with a recruiter and spots an opportunity to infiltrate the organisation.

There’s one obvious problem – clearly he can never meet them face-to-face. A small team is put together with fellow officer Flip Zimmerman (Adam Driver) taking his place and name when that’s needed. But even as nefarious plans are uncovered and a visit by the Klan’s leader David Duke (Topher Grace) is scheduled, how long can the police-officers keep their complicated and audacious deception going?

Though a few fictitious elements are introduced to give the film a more traditional structure, it’s interesting to note that many of the essential events and beats of this captivating story (even the most unlikely) are actually true. Rookie police-officer Ron Stallworth really did infiltrate the Klan after casually answering an ad to get more information on them, he and his team really did play bait-and-switch with the local supremacists and Stallworth was ironically made Duke’s protection-officer during a local visit.

John David Washington, like his father Denzel, has immediate charisma, able to play the fun and more edgy aspects of the character and his predicament. Adam Driver puts away the dark side of the Force and portrays a Jewish cop forced to confront the bigotry of the KKK for the first time and becoming the ‘face’ of Stallworth when he has to meet the Klan in person. Topher Grace may have got his early breaks on That 1970s Show, but he’s long since proved he can diversify and his younger David Duke manages to pinpoint all the self-importance and arrogance of a mundane man playing at ‘Grand Wizard’ superiority.

Lee’s previous works (or ‘joints’) have been divisive. There’s no doubts about his talents as a film-maker but his subject-matter has sometimes been perceived as being made for specific (and often neglected) audiences rather than the entire mainstream, highlighting under-represented minorities or pivoting around subjects that would appeal that way.  Blackkklansman feels like a deliberate – and largely successful – effort to tackle a similar throughline of subject but in a way that brings in mainstream audiences as well. And while not perfect, the result is a quite masterful mix of needed ingredients.

Lee’s back-catalogue might have suggested we were in for another earnest examination of racial inequality and a call to power… however the trailer seemed to offer a lighter and more quick-beat and highly satirical bent. So, what would be delivered? It’s no mean achievement, but Lee manages aspects of both while making the elements work together, complementing rather than clashing. As much as there’s a sickening feeling seeing such abject ignorance in action (especially from people in positions of authority), there’s also an obvious inherent humour in watching a black police officer on a phone-call with a bigot who thinks they’re talking to a ‘fellow’ white supremacist, an Ali-G level of self-incrimination and ridicule for which they deserve no better.  In a story that’s almost stranger than fiction, Lee manages to use actual history to make us cringe, laugh out loud and think, sometimes cleverly wrong-footing us as he segues from the easily ludicrous views of those small-minded bigots to the truly dangerous venom they demonstrate. Yes, the N-word features throughout, but unlike the way that, say,  Tarantino’s appropriates epiphets through his work to look edgy, Lee makes the usage count. Even when some characters use it constantly, the displayed casual racism never becomes casual script punctuation.

True, amid otherwise restraint and balanced humour and drama, there are a small number of scenes where subtext threatens to trample the foreground. When the Klan talks about needing to influence politics and have people in places of high power to support them there’s a shuffling irony in the way a cop says ‘Well, America would never elect someone like David Duke president‘. When you follow it up with supremacists chanting ‘America First!‘ and ‘Make America Great Again!‘ the salient point feels arguably underlined or belabored depending on how you view nuance. However, Lee himself might spot that argument coming and finishes the film with a coda: footage of Charlottesville, the modern supremacists  clashing with Antifa and the tragic death of Heather Heyer (to whom the film is effectively dedicated). He could rightly point out that everything you’ve seen in the film is not as far removed by time as you’d want to think or want.  Lee’s film as a whole essentially notes that if Donald Trump had said there were – and have often been – agitants on both sides of the modern race-debates he might have had a point – Blackkklansman acknowledges there were problematic calls for violence from white AND black militant figureheads in the 1970s… but that in the modern 2018 President saying ‘there were good people on both sides‘ he squanders it.  No. There’s never been such thing as a good white supremacist.

Though set over four decades ago, it’s sad that Blackkklansman remains timely, but it must surely be an contender and assured nominee for the upcoming award season.

BlackKklansman is now available on DVD… 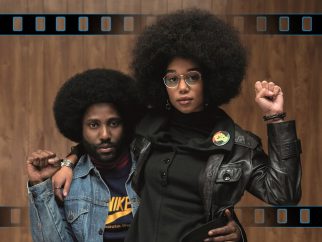 Like a Bosch. Amazon primes Connelly’s cop for sixth run…