Hits and Myth. There's the obligatory amazing soundtrack and a stunning recreation of Live Aid, but this story of Queen and Freddie Mercury has no real surprises...

It’s the 1970s and a million bands are created with their members hoping for stardom, but those dreams are about to come true for Brian May (Gwilym Lee) and Roger Taylor (Ben Hardy) when their band ‘Smile’ loses its lead singer and a fan named Freddie Mercury introduces himself and his vocal range. Together with John Deacon (Joe Mazzello), the band change their name to ‘Queen’ and begin a transformation that catches the eye of record executives looking for someone new. The band want to push the boundaries of expectations, bringing an operatic scale to a music scene that relies on formula and despite opposition from an industry more akin to safe bets, their rise to stardom begins.

But while a singular talent, Mercury’s impressive ego is at odds with inner torment about his sexuality and place in the world and as the band goes from strength to strength, carving a unique path and establishing themselves as a truly legendary band on a global scale, the fractures start to widen.

As the greatest music event of all time appears on the horizon, can the members of Queen repair their relationships and take the crown once more?

The maxim amongst film-makers looking to real people and real events has always been to ‘film the legend’ and few bands are as legendary as Queen.  Whatever your taste in music it would be hard to argue that there was ever a band like them – before or since. In terms of their scope, success and sheer unapologetic ambition, they set new boundaries and shook up an establishment that was often more happy to be safe and formulaic.

The journey to the screen was notoriously complex. A proposed version of the Queen story directed by Stephen Frears and with Sacha Baron Cohen as Freddie fell apart early on, allegedly over the surviving members desire to have the film feature half of its running time on what happened after Mercury died. The Bryan Singer version that went before the cameras also had major problems with Singer controversially leaving the project months after filming began and after complaints about his behaviour and absences from the set (he quit, citing family emergencies or was fired-in-absentia depending on how you read between the lines) and actor-turned-director Dexter Fletcher stepped in to complete the  production (though he receives no on-screen credit for such).

So, perhaps the problem is that Singer doesn’t film the legend, he films the myth and a familiar one at that. Like That’ll be the Day and its sequel Stardust or Walk the Line, A Star is Born, even That Thing You Do or the sly Still Crazy, we’ve walked some of this territory of ‘fame and its dysfunctional flipside’ before. The hook here is that it’s ‘real’ with people who became icons of the music world and lived the dream and nightmares that entails. The band bristled at conformity and subtlety, frequently doing the unexpected on creative levels and never shirked from taking risks. Bohemian Rhapsody – as a movie – consistently struts in those directions, spinning and pirouetting with promises of the salacious excess and ego that became synonymous with Mercury, glances nonchalantly at the party faithful and then… coyly bats its eyes and orders an espresso as it pulls down the shades and cuts to the next day. Yes, it addresses Mercury’s bisexuality and promiscuity and how his ego helped and hindered in major ways as he sought to understand and accept himself (as much as have that acceptance form others) but while it tells the beats of that journey well enough, it doesn’t really shock or surprise or give us anything we didn’t already know. In a recent interview Ben Hardy notes that the PG13 certificate meant that his Roger Taylor could hardly be seen smoking conventional cigarettes on camera – and, frankly, that’s damning for a film of this subject-matter.  In short, Bohemian Rhapsody‘s greatest flaw is perhaps in the very conformity the band and Mercury struggled against. It’s a decent, well-meaning if wholly average film with a wholly extraordinary soundtrack around which everything else is built.

But it’s in that music where the film predictably soars. The last fifteen minutes are devoted to the band’s performance at Live Aid and that is reproduced in quite amazing fashion and for those of us old enough to have experienced the events the first time around, it gets the pulse pounding and a surge of adrenaline that replaces the aroma of nostalgia the rest of the film offers. And the movie, for better or worse, decides to go out on that literal high note, with the crowds at Wembley and the viewing public rightly mesmerised by the music and in awe of the talent on show – only adding in written epilogue the last few years of Freddie’s life and almost nothing about the fortunes of the surviving members who ultimately decided to remain as a group without him. It’s an understandable choice but a gaping hole nonetheless.

For all this being marketed as the story of Queen, it’s really the biopic of Freddie Mercury with the rest of the group merely supporting performers. In real life that was sometimes the side-effect of being in Mercury’s orbit – however genuinely talented Brian May, John Deacon and Roger Taylor were and are, Freddie burned so brightly that others frequently got eclipsed. The film attempts to give them some spotlight, but you’d struggle to find any real details here about their personal lives that come close to the time given to Mercury’s trials and tribulations. Mr Robot‘s Rami Malek is exceptional in the role, visually a dead-ringer for the singer and performer, capturing the strut and the  ego, the arrogance and the occasional vulnerability. Gwilym Lee is a dead ringer for Brian May, as is EastEnders‘ Ben Hardy for Roger Taylor and Joe Mazzello, who essays John Deacon, has come a long, long way since being menaced as the young Tim in the original Jurassic Park. There’s also decent support from the likes of Aidan Gillen, Tom Hollander, Lucy Boynton (as confidant Mary Austin) and the in-joke of Mike Myers play executive Ray Foster who notes no-one will be banging their heads to the titular song any time soon.

Bohemian Rhapsody is just a good-not-great movie about a not-just-good-but-great band and it’s worth experiencing it for that reason alone, but it plays to its hits, misses some of its more interesting cues and without that epic music as its backbone, this champagne supernova of beautiful dysfunction would have just been bucks fizz… 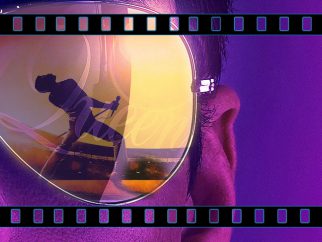 Why Who not present for Christmas? What of 2019?