'Firefly' and 'Castle' established Nathan Fillion's likability, but does 'The Rookie' make the grade?

Forty year old John Nolan (Nathan Fillion) is feeling adrift. He’s newly divorced and has no idea where he wants to go next. But moments after depositing his divorce papers in his bank’s security deposit box, the bank is the subject of an attempted robbery. Nolan’s bravery – or stupidity, even he’s not sure – helps save the staff and he decides that law enforcement is the role that could give his life meaning.

Nine months later and Nolan is the oldest police ‘rookie’ in Los Angeles.  He’s done his training, passed every test and earned the right to be there, but does the police department have the resources or inclination to back Nolan’s desire to protect and serve? Many of the powers-that-be note that a department charged with the serious safety and security of the city is no place for a guy to explore a mid-life crisis, especially one who doesn’t have the youth and vigour on his side and where the lives of citizens and fellow officers may be in his hands every day.

Nolan joins two other eager new recruits to prove everyone wrong, but their first week on the job will test everyone’s resolve…

How do you solve a ‘problem’ like Nathan Fillion?  That’s been the question that ABC have been pondering for the last year or so. It’s a ‘problem’ that many a network wouldn’t mind. With the likes of Firefly and Castle cementing Fillion’s reputation as a genre favourite and a savvy, approachable personality, he’s been consistently working and pulling in audiences. As well as forays into multimedia (Joss Whedon’s Doctor Horrible, a recent unofficial but significantly-budgeted tribute to the PlayStation game Unchartered to name but two) and the occasional supporting role in big-screen fare such as Waitress, Slither and an uncredited Guardians of the Galaxy cameo, it’s still the tv world in which he’s most made his mark, trading on an innate affable charm and a willingness to be the punchline of the joke as much as the one delivering them.

However Castle (which ran for eight seasons between 2009 and 2016)  was both a curse and a blessing, a popular show that finished with a bang and a whimper, a bizarre collision between gunning down its characters and yet giving them a happy ending (or, more specifically, an on-screen story  wrap-up amid apparently acrimonious conflicts between its stars off-screen). The decision by ABC to reduce the show’s budget and not to renew co-lead Stana Katic’s contract as ‘Kate Beckett’ meant the initial intention was to continue the show for a tenth season without her, most likely killing her central character Kate Beckett. But that was met with such a fan backlash that the planned continuation of the show was shelved in just enough time to film a more positive but bizarrely brief coda (Castle and Beckett both survive being shot at point-blank range and we flash forward several years to see that they go on to have a family). It was the kind of backtracking, stuck-on ending that felt so rushed that it pleased no-one.  Fillion remained strategically silent on the matter.

Katic went on to appear in the dark and excellent but largely below-the-radar series Absentia (catch it on Netflix!) and for the next two years or so, Fillion’s appearances were largely limited to recurring guest roles in the likes of Santa Clarita Diet, Modern Family and A Series of Unfortunate Events.  But there was clearly a search on for Fillion’s next ‘vehicle’. It was perhaps something of a surprise that it came in the form of another  ‘off-beat addition to a police department’ – not, as many noted, the largest step away from the premise of Castle.

Though it’s easy to initially note the similarities, it’s easy to see why, with all its pros and cons,  The Rookie got the greenlight. Yes, it’s blatantly close enough to the Castle formula to pull in every single loyal viewer from that audience while arguably having just enough new aspects to provide a genuine variation in the delivery.  This time Fillion is John Nolan, not a charming, affable mystery writer but a more earnest if equally sardonic character fighting both a sense of injustice and a potential mid-life crisis. While Richard Castle was played as a flawed man with an enormous if endearing ego, Fillion’s Nolan is the flipside. There’s still the ability to offer a well-scripted aside and the occasional snark, but Nolan’s almost devoid of that personal ego – he’s genuinely a humble guy, shuffling through life and now willing to jump through every hoop and task in the hope of making a difference – proving to himself as much as anyone else that he’s not wasting his time.

Though it’s Fillion that anchors the show and gives it its heart, there’s able support so much from a raft of other performers and characters – so much so that one wonders if there was an incarnation that was more unapologetically an ensemble-show pitch, less built and marketed around one name. Richard T. Jones (The Sarah Connor Chronicles, Wisdom of the Crowd) is the cynical sergeant who genuinely believes Nolan is a liability,  Melissa O’Neil (Condor, Dark Matter) is fellow rookie Lucy Chen, Titus Makin Jnr. (Glee, Pretty Little Liars) is legacy recruit Jackson West and Eric Winter (Rosewood, Secrets and Lies) is the tough almost sadistic taskmaster Tim Bradford who expects them all to fail.  All of the characters are arguably archetypes, slotted into their needed niches but all the performers make them potentially interesting.

Ultimately, fine… The Rookie isn’t a stretch for Fillion and it doesn’t feel like it has the substance to grab as much attention as Firefly or Castle – yet. But the pilot suggests it is a serviceable drama about service, designed to have just enough elements to quietly distinguish it from Fillion’s past efforts while ticking all the boxes:  a well-intentioned, easy to market safe bet that plays to similar strengths. The groundbreaking Hill Street Blues, this isn’t… a decent primetime viewing experience it is and it’s a Rookie that could still earn its stripes.

The Rookie is on ABC on Monday nights… 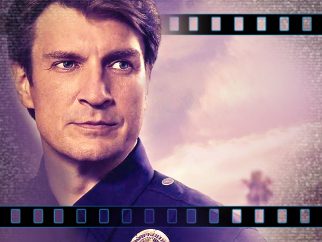