Netflix's 'The Haunting of Hill House' is a masterclass in slow reveals, a 'This is Us' for the discerning horror fan...

It’s the 1990s and Olivia and Hugh Crain and their children (Steve, Shirley, Theo, Luke and Nell), has moved into Hill House, planning to clean it up over the summer months, do a few essential renovations and quickly flip the property, making a profit and allowing them to build their own forever home.  However their plans are scuppered by a rising damp that they can’t seem to get rid of and a series of strange nightmares and visions that plague not only the Crain children but the normally free-spirited Olivia. Slowly, but surely, it feels as if something dark and sinister is prodding at the edges of their world and moving them towards dark ends.

Today:  The Crain children have largely gone their separate ways, each distancing themselves from the events of their childhood and finding different ways to cope with tragedy. Steve is a successful author and has written a book based on a sanitised version of events, Theo has obtained her Psychology degree and helps damaged children, Shirley owns a funeral home, Luke has descended into a troubled cycle of drugs and rehab and Nell has tried vainly to conquer the night-terrors that still plague her.

A further tragedy brings the surviving members back together, but it appears that to move forward, all of them will have to face the truth of what happened to them at Hill House all those years ago and what still lingers within those walls. However, the truth is a very dangerous and subjective thing…

Hill House, by virtue of its adaptations alone, could well be the most famous haunted house in fiction. So a reasonable person might question the real estate value of entering its halls and climbing that twisty staircase once again.  While it might not suit all tastes, in an age of abject torture-porn and overblown CGI, The Haunting of Hill House is old-school entertainment and, frankly, all the better for it.

It’s not that there aren’t visual effects and post-production magic in the mix, there definitely are, it’s that the mini-series doesn’t use them as merely a crutch: they are a gothic garnish on an already tasty and ambitious spread. Rather than reveling in spurting blood and reckless carnage which are now so often the go-to elements of otherwise lacking drama, the carefully-rationed scares, jumps and building sense of dread are largely down to the quality of the performances, the directing and camera-positioning, creative transitions and  – often under-appreciated – the sound department. Like the building of the title, it consistently feels as if everyone is working to an elaborate blueprint rather than a perfunctory punchline.

Many a series appear to make things up as they go along, tilting towards what makes a good set-piece in the moment rather than something necessary to the plot. With Haunting, everything is necessary – perhaps excepting the unrealistic financials of Steve’s royalty cheque and Theo’s Psychology degree. While the actual progression of the story is slow – by the end of Episode 5 we’re technically no further along in the time-line than the end of the first episode –  the way that the episodes interweave into the bigger narrative is deceptively skillful. As layers are peeled away and each character gets their moments in the spotlight, we’re allowed to see previously-viewed events from different perspectives or with backstories that provide a better sense of context. It’s a weaving threads-through-past-and-present method of character-study that’s become more and more popular recently – a staple of cult hits such as LOST and, more recently, This is Us. It also bears some resemblance to the original IT mini-series in technique – though Hill House‘s dour ghouls and ethereal threats seem to have more in common with the Gentlemen of the famous Buffy episode ‘Hush’ than the colourfully venomous Pennywise.

While there’s a continued sense of mystery, it comes with satisfying pay-offs along the way. A little like the early Insidious films, there are moments and callbacks where it’s obvious that there’s been consideration given well in advance. For instance, at the end of the Hill House‘s fifth episode, there’s a revelation that underscores several previous visitations from other episodes and it makes sense. And Episode Six, especially, proves to be a masterclass in direction and structure. Watch closely and it’s like a full-on stage-production: there’s only a handful of obvious camera-cuts in the whole hour. With a mixture of camera-movements, actors knowing their pages of lines, carefully-designed sets and the odd sleight-of-hand, we essentially spend twenty minutes gliding around the funeral home and acting like a spectral voyeur over the crumbling family dynamics. What could have been just a hokey ‘look-at-me’ stunt format feels largely organic and it’s the kind of experience that demands rewinding and repeat-viewing (with things lingering in the background that you may not notice the first time). It may not move things along, but it restores your faith that the production is being made by people at the top of their game.

As has been duly noted, The Haunting of Hill House is perhaps more adept character-study pivoted around mental fragility than all-out visceral horror. Yes, there is the supernatural element that underpins absolutely everything that happens and there are some genuine jump-out-of-your-seat scares, but the bigger story is more about using the genre as an exploration of trauma, guilt and grief and the way that someone’s past can haunt them in other ways: a look at how the Crain children each handled their experience at Hill House and how it influenced their triumphs and tragedies as they grew up. The series is loosely inspired by the original  book by Shirley Jackson (which has already wrought two more direct big-screen adaptations) but with Salem-born Mike Flanagan (Gerald’s Game, Oculus, the forthcoming The Shining sequel Doctor Sleep) very much going off on its own tangent, using the basic idea of a haunted house to further explore family dynamics. Yes, there are moments when it veers towards Six Feet Under‘s  death-hued family angst, but go with the long-game strategy and there’s nary a wasted moment in the entire ten hours: that format giving an opportunity to explore intricacies, characters and themes more deeply.

The casting is also spot on. Notwithstanding Henry Thomas’s distracting contact lenses (to make him match with ‘older’ counterpart Timothy Hutton), the ensemble comes together wonderfully. The younger versions of the characters are all great: Paxton Singleton, Lulu Wilson, McKenna Grace, Julian Hilliard and Violet McGraw convince as the Crain children before the house had its way with them and they walk the line between the adorable/snarky aspects that lesser performers fall in to. On the adult side, Thomas, Hutton, Carla Gugino, Kate Siegel, Oliver Jackson-Coen, Michael Husiman, Elizaabeth Reaser and Victoria Pedretti with also Annabeth Gish and Robert Longstreet, all bring their A-game and relish the experience.

The title-sequence joins the growing list of provocative  intros,  something that Netflix has mastered in recent years, though there’s a danger that however slick the are, they’re also becoming interchanageable (seriously,  Hill House‘s titles sound like Westworld and look like Daredevil, though they are good benchmarks).

More accessible than Herditary and far, far more than the ‘Lifetime-meets-SyFy movie-of-the-week’ quality that it could have been in less assured hands, this is a mini-series that’s equally full of dark melodrama and magic – wholly impressive but still something that shouldn’t get a sequel. It ends, unlike so many horror outings, with  its story told and with no need for commercial continuations. In doing so proves itself as much a love story and tribute to melancholy.

As an indicator for more quality drama, Hill House is a powerhouse and is definitely the benchmark quality for which Netflix should be aiming… 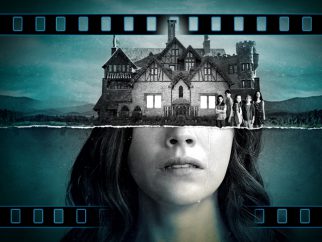