A Marvel movie with a big jaw but no teeth...

Eddie Brock (Tom Hardy) doesn’t have it all, but he has enough to get by.  His investigative-reporting has got him a gig with a significant financial-backer, his fiancée (Michelle Williams) has a tolerant attitude and a high-flying legal job and Brock is one major story away from the big time. When he lands an interview with famous entrepreneur Carlton Drake (Riz Ahmed), he smells a bigger story – one that suggests that the billionaire’s medical empire is built on less than legal practises. The encounter backfires as Brock finds himself without a job, a fiancée or a regular source of income. Then he gets a tip-off that could get him into the shady heart of Drake’s empire…

The problem is that Drake’s secrets come in the form of a group of symbiotic life-forms recovered from his last space-shuttle venture with Drake seeking a way to bond them to human beings, however many rules he ahs to break. The even bigger problem is that those creatures have an agenda of their own… and one of them sees a means of escape through Eddie Brock.  Can Eddie defeat the alien or will Drake’s plans mean an even more unearthly alliance with the cosmic creature?

There’s no doubt that Venom is a bad guy, but how bad is the film? That’s been the question this month with quite dreadful advance reviews….

The truth is that Venom is not quite that Catwoman-level disaster that some might have been proclaiming. It’s just… well, really not that good either. What it is …is  late to the party in almost every important respect. If someone told you that it had been made a decade ago and had been sitting on a shelf, untouched and awaiting release  it would be utterly believable. And in an era where Marvel keep moving the blockbuster benchmark ever onward, that in itself could be damning.

Though rarely a deal-breaker or barometer for success, the story is an undemanding, logic-free template complete with boo-hiss bad-guys and dodgy science, landing  somewhere between a Saturday morning cartoon of old and a CW show with a biggish budget but passed-over pilot.  It feels like someone saw a Hallowe’en marathon featuring  Species and Life and decided to graft it to a Marvel movie with a few latent Deadpool quips thrown in at the last minute – but the molecular seams all too visible.

Tom Hardy is the strongest thing in the movie, pitching Eddie Brock as less the sleazy, scruple-free reporter of the source-material and more as an affable working guy / vlogger who’s making the best of some bad choices. It’s a tribute to his talent and diverse career-choices that it’s hard to think of him as the Picard clone of Star Trek or the Regency thug of Taboo and if Brock doesn’t push any boundaries, it does show Hardy can slip more effortlessly under the skin of just about any character with greater efficiency than any alien. Oscar-nominee Michelle Williams grins and bears it, essentially slumming it and banking the cheque for an under-written role as a love-interest.  Riz Ahmed’s Carlton Drake is the evil genius taking in the homeless with promises of food and warmth and then experimenting on them to give alien symbiotes food and a warm host… well, cue maniacal laughter….that’s about as stereotypically nefarious as you can get without stroking a white cat on your lap. As a big bad, he’s just a bit bland.

The symbiote’s first crack at the big-screen was as a third-string threat to Tobey Maguire in the Raimi-era Spider-man movies but essentially that amounted to a bespoke black-costumed maguffin to make Maguire’s Peter Parker and Topher Grace’s version of Brock strut around like they were on the way to take names at a nasty poker game. There was none of the separate acerbic, snarky personality that developed in the comics. Here the scale tips the opposite way. Venom him/itself  is played less as a monster than as an alien punk with a New Yawk attitude, albeit a distinctly  ‘wannabee Deadpool but stuck with aPG13 certificate’ variety. You can imagine him playing the wacky side of an extraterrestrial double-act in a road movie with a Predator (and, frankly, it would be more fun). That being said, one doubts Ryan Reynolds is losing any sleep over it.

The effects vary between adequate and disappointing but in an era where CGI takes impressive leaps and bounds on a regular basis, the physical on-screen leaps and bounds here seem very restrained and computer-generated. Venom, as a comics creation, positively screams for the opportunity to render that reptilian mouth and slathering jaws in cutting-edge detail but instead the transitions look uninspired, the textures artificial and the symbiot’s fluid flexing simply a creative fractal effect. It looks like Giger designing his infamous xenomorph on a Spectrum. It could simply be a case of sfx-fatigue – whatever you feel about Marvel‘s domination of the box-office, the fact is that they’ve been at the cutting edge of blockbusting and once you’ve seen killer robots and destroyed half the universe, there’s a limit to where you can go.

Deserving of neither the poison-pen reviews nor unexpectedly high box-office receipts in its first week, Venom remains a curious creature. Marvel Studios finely-tune their end-results, sometimes to the extreme, but Venom – part of the parallel ‘Sonyverse’ – feels like a first-draft, committee-designed endevour where everyone is pulling in slightly different directions and where the result never becomes the best of any of them.  Ruben Fleischer, who directed Zombieland and episodes of Superstore and Santa Clarita Diet, should have been a great choice to helm this but can’t get the needed balance right. It’s not as funny, violent. dark or black-humoured as any of those things needed to be to set it apart.

(If you manage to stay through the film, there’s two sets of end-credits – one featuring a familiar Zombieland cast member and another which is basically a glimpse of the upcoming animated multiverse release  ‘Into the Spider-verse‘ – the latter packing more excitement and anticipation into three minutes than the entire film before it…)

In the end, neither venomous nor poisonous, the main feature is merely…irritating… 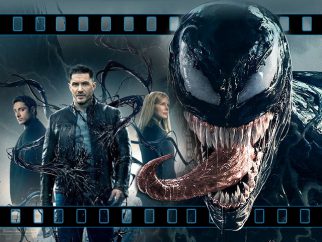