The second episode in Doctor Who's new season, 'The Ghost Monument', is still finding its feet, but plants them towards a fun run...

The last time we saw The Doctor (Jodie Whittaker) and her new friends, her calculations had gone askew and instead of materialising with the Tardis, they’ve been left floating in the vacuum of space. Sadly, they all die – and that’s the episode done.

Or… not. No, just in two nicks of time, separate ramshackle space-shuttles independently scoop them up. Angstrom (Susan Lynch) and rival Epzo (Shaun Dooley) are the last two contestants in a cosmic race across the galaxy organised by the billionaire Ilin (Art Malik) and have saved the travellers because it will earn them extra points rather than for any altruistic reasons. Graham (Bradley Walsh) and Ryan (Tamsin Cole) find themselves on Angstrom’s vessel, not knowing if they’re friends survived and The Doctor and Yaz (Mandip Gill) try to survive re-entry aboard Epzo’s equally dodgy craft.

Safely(ish) on the surface of a planet known as Desolation, they are given instructions as to the last obstacle of the race and a hint at the dangers still in front of them. They must avoid the threats of Desolation’s resident defences, some physical, some even more dangerous…. and they must strive to reach the end-race marker known as the ‘Ghost Monument’, an ethereal object that shifts in and out of dimensions.

Whether intentional or not, there’s quite the Firefly feel to the early scenes of The Ghost Monument – the idea of space-ships being held together by stubborness and hope as much as shielding and steel… and with the working grunts barely making a living on the dustier side of the final frontier. Angstrom’s ship and its landing struts has echoes of Serenity and it’s not entirely difficult to imagine her encountering the likes of Mal Reynolds and his crew on a good / bad day.

Though once again perfectly fun, the actual story here is pretty basic with pros and cons depending how deeply you look. For instance, it seems weird that our team is in the same place in the same few seconds and conveniently saved by two rescuers who aren’t aware that the others have also been saved. It’s a good to introduce other characters, but stretches logic –  though at least there’s no Vogon poetry in the aftermath. Equally the later Pythagorus/Hepburn line regarding Graham’s latest accessory  is funny and typically Who, but one has to wonder where the Doctor really got those sunglasses bearing in mind the all-important plot-point that she had no possessions in her pockets last week. The cinematic widescreen is effective and the production design is good (though the choice to have some swirly floor-graffiti revealed as a full-of-specifics diary entry and convenient exposition-dump feels akin to reading a corn-circle like a long e-mail). Again it’s very much a case of shuttling the cast from one location to another – with South African beaches standing in for literal Desolation. However with the Doctor’s main introduction out of the way, it does feel as if the sands are settling a little and that these two outings are here as the groundwork. By the time we reach the closing credits it feels as if we’re only now about to embark on the first real adventure of the run…

Whittaker channels the requisite Doctorish quirks and is already well at home in the role. There are still moments when it’s edges towards pantomime- hopefully she can rein in the tendency to use the sonic with the somewhat over-theatrical, extended-arm flourish better suited to a rapier. It’s always important to establish the Doctor as a moral character who prefers words to bullets, but the episode perhaps picks a questionable demonstration of that stance by having her overtly criticise Ryan for being too eager to blast lifeless robots with a lazer-rifle but is seemingly far less bothered when she burns her ribbon-like enemies to death in the following act with an errant cigar. (See kids, smoking IS good for you!)

Though not yet reaching Cribbins-levels of belovedness just yet, Bradley Walsh’s Graham is certainly more pro-active and a considered voice of reason this time around. Tosin Cole’s Ryan asks a lot of the right questions and though Mandip Gil’s Yazl has far less to do this week, she’s still a character to watch.  Chibnall said that the new run would look more to the future than the past with largely standalone stories but there are a couple of instances here that suggest that might be a bit of misdirection.  A specific Pertwee skill gets referenced (and used effectively), there’s definitely the potential to meet some new characters again, there’s some unexpected name-checking and a challenge to the Doctor and her memory that could be taken as either an arbitrary comment or the seed of something far more significant.

Guest-stars Susan Lynch and Shaun Dooley are fine with some nicely acerbic dialogue and moments of interesting familial backstory though their appearance does seem a bit foreshortened when it’s all done. They are the sorts of characters that would have benefited from more exploration and time given to them in the old multi-episode stories. Equally, the brief role of race-organiser Ilin screams for the stunt-casting of someone huge and dominating for the handful of lines they have. Instead we have the capable and sturdy Art Malik – a strong, veteran actor with the right material – but who has far too little to do and does far too little with it- instead going with a sense of almost disaffected disinterest.

And, yes, ready the drum-roll… absent from the opener, we finally get that much-anticipated Tardis reveal, an element that will be scrutinised by the faithful for a long time to come. Like the new title and music that opens the episode, it will likely depend on your personal taste but they all feel like a mash-up, collision and amalgamation of previous themes and ideas. (There’s still no particular reason as to why our latest Doctor initially got ejected from the Tardis above Sheffield, so it will be interesting to see if that comes later?).  The new control room takes a huge cue from the Tennant era’s cavernous interior but adds a few bells, whistles and flashes of neon to the mix. It’s also using only half the utilities bill at the moment, making it too dark to gauge the full effect, so it will be an ongoing evaluation, but those worried by the sterile, bleak and over-lit leaked photos ahead of broadcast will likely be relieved by the enigmatic look of the actual reveal.

So far, the new season of Doctor Who is doing fine. Nothing more. I have my niggles and quibbles which I think I can justify, but whomever you are as a viewer, one needs to remember that it a production that has to cater for everyone eight through eighty and tonally that means there’ll always be differences of opinion – too dark, too light, too vague, too specific etc etc. Maybe it’s not reaching spectacular nor amazing levels for me thus far (though viewing figures are cosmic enough) and instead tilting towards classic reliables of old, but it is powered by enough sheer goodwill to match its eye of  harmony and to know it has to walk before it can run before it can soar.

With these two merely functional and foundational episodes under its belt, it still has something to prove. With next week’s third episode built around Rosa Parks and the state of race relations in America during the 1950s, the stakes are arguably higher and the show will face its biggest and most fundamentally important test of tone and emotive resonance so far… 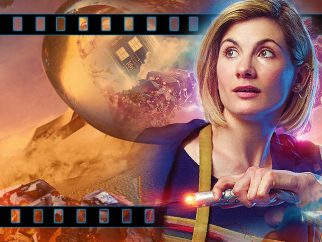