It's the most awaited tv debut of the year, but the new era of the Doctor seems promising rather than spectacular...

In the fields and woods above Sheffield, a young man  tries to find his balance and, instead, finds a doorway from another world. On the train-tracks in the heart of the city, the late-night express comes to an abrupt halt when an alien visitor makes an unexpected ticket-check. And all of that comes before another figure hurtles down through the roof, making a dramatic entrance and trying to redefine their place in the universe…

No Tardis. No sonic screwdriver. No clear memory.  But the Doctor, never one to turn down a cry for help, is back on the frontline against those who would come to Earth with mischief in mind.

It’s no lie to say that the new season of Doctor Who is one of the most eagerly-awaited debuts of the year –  it seems an age since Peter Capaldi bowed out of the role and the new incarnation found herself plummeting towards Sheffield for ten months. So whether a die-hard Whovian or a casual viewer, perhaps the sky-high expectations were always going to be eventually grounded in reality. Each new regenerative chapter in Doctor Who‘s evolution is, by necessity, something of a ‘pilot’ – once again needing to introduce the show’s cast, set out its stall and demonstrate something of the tone we can expect in the weeks that follow. Despite the trumpets and fanfare, or maybe because of them, such episodes are tent-pole affairs but rarely the best of the entire run – however, they serve the function of that all-important first impression.

In many respects, The Woman who Fell to Earth feels looser and lighter than one might expect from the man behind the more methodical and brooding Broadchurch. While Steven Moffat’s tenure frequently flipped between micro-managed easter-egg mythological details and broader, hand-wavery, high-conceptual obstacles and enemies, Chris Chibnall’s first full episode is somewhere in-between… a broader church (if you will) for more than just the party faithful yet very reminiscent of more old-school family/behind-the-sofa Doctor Who pacing of the 1980s. That brings with it pros and cons.  This is an all-important decent entry-point, but one that seems deliberately wide, rather than majestically tall – an attempt to infodump/introduce a lot of new characters and have a lot happen to them over a short period of time in an effort to get to the new status-quo as soon as possible. (The extended opener runs to just over an hour but really feels no longer than the standard forty-five/fifty minutes it will usually last). As a result, there’s very much a feel of characters going through a checklist of traditional elements and being ushered out of one scene and location into another to keep the story going. Consequences are not the epic call-backs and ominous foreshadowing of Moffat’s era, but more in-the-moment settings to move through and beyond. Like the store where the Doctor ultimately gets her new outfit (not sold on that yet, but give it time and space…) there’s a sense that the key-word so far is ‘thrifty‘. A keep-things-moving imperative. The major train incident near the start of the show is quickly distanced as our new crew conveniently bond and head off to investigate other matters; a man in search of his sister becomes a casualty of an alien-form (and exposition) and another significant death is mourned sorrowfully for a few minutes before life goes on. “Get a shift on…” says our Gallifreyan lass and does so with gusto.

There’s been the expected scrutiny of the gender-swap from all sides. There was the sadly inevitable sexist shorthand from the tabloids about boobs, she-sheds and women drivers and even a parallel concern that a gender-swap would be the exact opposite… becoming just an overt click-baity, cat-nip rallying call to singular female empowerment at the expense of telling a good sci-fi story (The Doctor battling Him-Bots and the evil Msyoginists of Mars?). The truth is – as the majority of sensible people could have told you and probably already did – that while this Thirteenth Doctor could be a valid addition to the #MeToo era of standing tall, the gender change amounts to nary a ripple. The Doctor should always be played by an actor who can do whimsy, arrogance, compassion, joy and determination. It shouldn’t – and frankly it doesn’t – matter what gender, colour, height or nose size the performer playing the character is and it’s ridiculous to assert otherwise. It’s delightfully unique in that way, even if it’s taken over half a century to underline that so prominently.

Whittaker is a proven talent in all those departments. For me, the decision by Chibnall to only consider women for the role felt as potentially sexist as only considering men, but it’s all in the result.  Whittaker is every bit as good as you’d expect, bringing a sense of wide-eyed, crinkley-nosed wonder to proceedings. The fact that ‘he’ is now a ‘she’ is quite rightly largely irrelevant to proceedings. Every incarnation shambolically tumbles through their opening adventure as they find their literal feet, nose and chin and if the script over-sells that displacement aspect just a little too much at times, it can be forgiven as upholding a tradition, at least for a while. Once the dust has settled, it seems likely Jodie’s Doctor will be fun-loving and excited for her new blueprint but given Whittaker’s previous roles, and her stand-off with the episode’s alien, she can still bring a steely edge as and when required.

Mandip Gill shows promise as Yaz, a bored but resourceful young police-officer who yearns to make a difference beyond mundane domestic disputes and finds herself slap bang in the middle of more drama than she expected. Hers could be a breakout character if she’s given more to do. Tosin Cole’s Ryan is fine, though beyond his specific diagnosis of dyspraxia (a problem with balance and co-ordination) and a more metaphorical lack of direction, he’s something of a clean-slate to work with.

Bradley Walsh is best known for his outgoing personality and comedic turns but has impressed in straight roles such as in Law & Order: UK. It’s interesting to note that he plays Graham as a smaller man, perfectly nice and reliable, but somewhat timid and cautious. It doesn’t mean it’s a bad performance – far from it, it’s likely a restrained starting point for character growth still to come – but there are some moments when you ache for Graham to be more expressive and dial up emotions to more than a ‘7’. His written, off-screen back-story is full of triumph and woe but it’s more dramatic than anything we see of him on-screen – short of an effective eulogy he gives, where his angst is mostly limited to a furrowed brow, quiet despair and a despondent self-deprecating shrug.

Moffat’s Doctor Who was essentially the Time-Traveller’s Wife (and no surprises, a tv adaptation of that is another of his upcoming post-Who projects) full of sweeping tragedy, star-crossed romance and chronological challenges often walking a fine line between being brilliantly smart and over-confidently smug. It’s not clear yet what Chibnall’s tonal remit for the show and character will be. Speculating…. wonderfully off-beat aunt / big sister with the reassuring pep-talk rather than gleefully grumpy grandad / aging rocker with the quite magnificent soliliquies? Whatever is on the new horizon, it appears it’s nothing that a chip buttie and a sonic screwdriver won’t be able to handle…

The new era will be judged by more then this one-size-fits-all reset episode, which is fortunate as you may want to love The Woman who Fell to Earth more than you actually do given it’s exposition-heavy pacing. But it’s Doctor Who. It’s back on tv. And it’s about time.

The Doctor is in and, yes, she’s got her shift on… 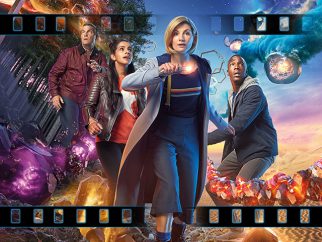