Coming out of the gate, 'Manifest' has an interesting if familiar plane-based premise, but can it maintain a unique flight path?

It’s 2013 and a flight from Jamaica to New York City becomes the latest plane to suffer from overbooking.  Some passengers are asked whether they will give up their seats and though it means some families may travel on separate services, Montego Air manages to sort their remaining passengers onto a replacement later in the day. However something more serious is about to happen, though the passengers themselves are unaware until their final approach to NYC.  They are met by police and security officials, all bemused and suspicious about the new arrivals… because though Flight 828 took off in 2013, it’s landed in 2018 and none of the people on board have aged a day.

The passengers insist they have no idea what happened and after their identities are verified and their health checked, the authorities really have no choice but to let them go.  The fact that the Flight 828 travellers were presumed dead has huge ramifications, not all of them simply ‘good’ or ‘bad’ consequences.  Engagements and marriages have changed relationships, people have died before being reunited and technology and medicine has improved, even in the space of just five years.

But amidst the attempts to return to ‘normal’ life after their unexplained absence, it becomes clear that something absolutely NOT normal is continuing to affect the passengers. Suspended cop Michaela Stone (Melissa Roxburgh) hears her own voice giving warnings that  subsequently save lives and she’s not the only one… everyone is slowly drawn bac to the tarmac where they landed, knowing they now have some strange connection…

But what really happened to them – and what happens next?

Despite claims it has been long in the making and planning, it’s impossible not to bring two obvious elements into any review of new NBC show Manifest.

The first is the real life disappearance of Malaysian Airlines 370 in March 2014 which saw the aircraft go missing from radar en route from Kuala Lumpur to Beijing with no wreckage sighted, none of the 227 passengers found and no concrete information ever established as to its true fate. For weeks, the oceans were scoured and the headlines filled, but any hopes that the plane had landed somewhere safely began to evaporate and it became a search rather than rescue. To this day, though it is presumed the plane crashed, nothing definitive has been offered. Truth, as they say, is stranger than fiction.

The second relevant element is, of course, a certain primetime phenomenon known as  LOST.  Manifest is essentially the flipside of LOST, two ideas separated not so much at birth as at the departure gate. It’s now about the consequences of a group of plane passengers not finding themselves misplaced but rather being found after the world misplaced them for a time and before they themselves knew they were missing.  Consider the itinerary: there’s air turbulence, unexplained number repetition, strange premonitions, familial angst and an element of time travel. True, there’s no sign of a polar bear as yet, but if Jorge Garcia had suddenly appeared as a pilot in a Dharma Initiative cap, it’s telling that no-one would have even blinked.

That’s not to damn it into any existential purgatory – LOST may have lost karma points with some for its drawn out, convoluted story and less than satisfying ending six years later, but it started with one of the most promising ‘hooks’ and openers viewers had seen in a long while. The same pros and cons face Manifest…  a great singular idea in search of a broader blueprint. It’s relatively easy to turn a one sentence idea into a  Twilight Zone-like pitch for a singular hour of tv – it’s harder still to find a construct that can carry the weight beyond that dramatic drum-roll and into a full season (and beyond). Posing fascinating questions is simple, providing satisfying answers is much harder (just ask Messers. Chris Carter and J J Abrams).

If you go with the basic set-up and the ‘just have faith’ tone of the pilot, there are still some quibbles in the execution. Short of some nasty turbulence there’s almost nothing viewed inside the flight that would lead us to think anything of note had happened. That could be deliberate, that we experience the flight like the passengers – though spared of the cellophane’d pasta and short leg-room. But when we finally learn, on-screen, that the flight has been missing for over five years, it’s delivered a little too quickly, pretty much as soon as the plane is met on the tarmac. It would have been far more effective if the writers and on-screen investigators had withheld that nugget to create some narrative tensions or at least delivered it with more import than a missing luggage announcement (“We’re sorry, but your carry-on appears to be stuck in 2013, have a lunch voucher on us?“)

By the time the rushed first act is over, we have had some effective and emotional scenes but our passengers have already bypassed their medical checks, reunited with surviving members of their families, shed tears over their off-screen losses and started to reintergrate into society. Now it’s more about the loves that didn’t wait, the promotions that were missed and a tug on the heart-strings as one of the younger passengers finds that research based on the studies of one of his fellow travellers could provide a cure for his previously terminal condition. There’s also the literal ‘voice’ in Michela’s head aiding her in stopping an accident and solving a kidnapping, so there’ll clearly be useful procedural elements in the mix as well. One presumes that though the pilot focused on just a few of the passengers, the series will open up the experiences and connections with other travellers as it progresses.

If one thing is clear it’s that this will be a show about very human choices and ‘Answers‘(tm) aren’t everything. LOST was arguably at its best not when it questioned the larger nature of fate and existence but when it created character-driven moments around such mysteries… and was at its worst when it attempted to expand its mythology merely by asking new questions rather than providing pay-offs – essentially diluting its power. Whether it’s ultimately divine, scientific or magical, short of waking up in a hotel shower and finding it was all a dream, no one answer will likely unite everyone’s judgement of the eventual pay-off, but Manifest will have to do more than point to the horizon and look enigmatic on a weekly basis. Audiences, burned by LOST, will need to feel there’s a game-plan.

Roxburgh’s narration promises such, though it’s conveniently short on anything other than non-specific faith and foreboding. We’ll see. The take-off was fine, but whether God, Hurley or Doctor Who turns out to be our co-pilot, Manifest will need to keep checking its radar, menu and landing gear…

Manifest is broadcast in the US on Monday evenings on NBC… 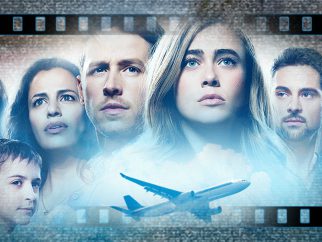