It's witches, vampires and demons vs. the Dewey Decimal System as blood and ink are spilled over the search for a mystic book...

When acclaimed historian Diana Bishop (Teresa Palmer) returns to Oxford to present a talk on the arcane elements in history, she’s seeking only to finish her research and possibly accept a position at the esteemed university. However  she manages to retrieve a book from the library that shouldn’t be there – one that sends power coursing through her veins. It’s a book that witches, vampires and demons have long since was lost to time and its re-emergence brings massive implications to the creatures that dwell as outliers around human society.

Now Diana, reluctant to tap into her own magical heritage, must find a way to survive the wave of attention she gets as various factions seek her help in harnessing the power as their own. Some fear the book’s power, some want to maintain the precarious status-quo and others use it as the ultimate weapon. But whatever truths that were in the book are now buried deep in Diana and she must choose her allies and enemies with care. The world as we know it may depend on her choices…

SKY‘s latest series is based on the books by Deborah Harkness and it’s clear to see why the broadcaster gave the show a greenlight – the author is a history professor based in California and her works of fiction combine some of the enigmatic trend of modern supernatural entertainment. Though it treads its way across some very familiar genre ground,  the combination of magic and immortal conflict in Discovery of Witches pumps along a strong bloodline, aspects of its vampiric tone sired somewhere between the traditional ‘lonely souls’ who swan around major European capitals (and major movie theatres) looking bored and hungry, a distinctly PG (and PG Wodehouse) take on the more lustful True Blood… and the more clinical and scientific aspirations of, say, Ultraviolet – where modern scientists looked into the molecular level to discover the truth about otherworldly enemies.  And it is all filtered through a timeless lens, rather smartly and effectively using contemporary locations such as the now Morse-less streets and spires of Oxford and the ever-reliable and elegant Venitian bridges and canals as its backdrops.  Almost genetically-engineered for the promotional windows of international bookshops, the books (and now this series) are a higher-brow Twilight for those with a slightly more discerning and eclectic taste in literature….

Those looking for cinematic pacing will appreciate the camera-work as it swoops and winds its way through scene-setting landscapes. A few smashed windows, neck-nibbling and lingering glares notwithstanding, A Discovery of Witches first two episodes are high on the simmering factor – enhanced by subtle special-effects  – but it never really boils over into the overt action that some might require. Like the libraries in which many of the conversations take place, it’s all very hushed and restrained with long walks, disapproving nods and furrowed brows rather than all-out arcane warfare.

Australian actor Teresa Palmer makes central character Diana Bishop an interesting protagonist, a person who feels a little adrift geographically and emotionally and one ill at odds with aspects of her magical heritage. She’s aloof enough without being cold but someone you want to root for as the threats begin to circle. Matthew Goode is very good in the role of Matthew Clairmont, one that requires him to arch his eyebrows and dryly walk the line between being enticingly elitist and dangerously pragmatic – perhaps think Methos in the Highlander series or Castiel in Supernatural. It was a role that many existing fans apparently thought Richard Armitage should have got, but Goode nails the difficult kind of cerebral charisma where you don’t know what he’ll do next but you want to know. Veteran British character actor Owen Teale (probably best known to international audiences for his role in Game of Thrones) makes a good zealot in the form of Peter Knox, seeking an opportunity to exercise (and exorcise) the right to rid the world of vampires. Ever the bridesmaid, Louise Brealey  also provides decent support as Diana’s conflicted friend Gillian Chamberlain. In early episodes there are also glimpses of other familiar faces such as Alex Kingston as Diana’s aunt Sarah and Trevor Eve’s  Gerbert D’Aurillac – each with different agendas.

While True Blood and the inhabitants of Bon Temps bump and grind their way through inter-species as if nudity was going out of fashion, the ‘fucks’ in A Discovery of Witches are limited to a few examples of bean-countered swearing and rather coy soft-focus flashbacks. It’s aimed at an audience that would examine the binding in a first edition of Lady Chatterley rather than pour over its pages.

Like curling up with a decent cauldron-boiler, A Discovery of Witches really doesn’t offer much that fans of supernatural romance won’t have seen before, but it stirs its ingredients well enough to cast a bewitching spell and produce give a pleasing flavour. 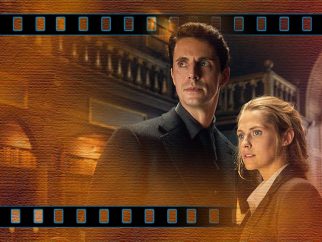