John Simm's university lecturer heads to Hong Kong when he receives news of his wife's death. But 'Strangers' sees him get more than he bargained for...

On a mountain roadside outside Hong Kong, Megan Harris (Dervla Kirwan) makes her way out of the city, talking on her cell-phone, leaving a message on her husband’s voice-mail explaining that she’s got herself into something very dangerous and if she doesn’t see him again, she loves him.  A few seconds later, a truck knocks her car off the road and it tumbles into the valley below.

Back in the UK, university lecturer Jonah Mulray (John Simm) receives news of her death. While Megan worked in Hong Kong for weeks at a time, he has a crippling fear of flying and so the couple spent significant times apart but he grabs a g-bag, a bottle of valium and heads to identify her body in the former UK colony. After doing so and collecting her belongings he spies another man (Anthony Wong) in the police station looking at a photo of Megan and when he confronts him outside, his already broken world shatters even more – the man identifies himself as Megan’s husband of twenty years, David.

As Jonah and David react to the news that neither of them fully knew Megan as well as they should have, the facts surrounding her death become more complicated. Did Megan die instantly, as the coroner tells them, or is there a cover-up?  The final message from her cell-phone may have that answer, but generates even more questions…

Not unlike another current primetime drama, albeit the higher-stakes, democracy-in-the-balance shenanigans of  BBC‘s Bodyguard, new ITV series Strangers also relies on  a somewhat unlikely set of agendas and internal logic. Look too closely and all the beautiful streets, the sprawling spread of humid neon and even the majestic Hong Kong skylines can’t hide the fact that there’s a great deal of short-hand in the plotting. Once you start to ask the certain pertinent and obvious questions that should swirl around the main idea  (why do the local authorities even contact Jonah when Megan has family in Hong Kong, don’t people carry phone-chargers anymore and – wait – you did WHAT to a priceless first-edition of Jane Eyre???????) then the central conceit and the stage-direction scribbles in the margins of the script start to fracture into a tv-universe-templated drama. Watch the episode devoid of commercial breaks and the awkward story-beats become even more profound, perhaps not helped by knowing that the exteriors were shot in Hong Kong, but interiors back in the UK.

The experience of watching Strangers is like reading the cliffs-notes about exciting cliffhangers or readying for a supposedly hectic chase scene that threatens to break out into a brisk walk at any moment if only it could just muster the energy or shake-off the jet-lag. 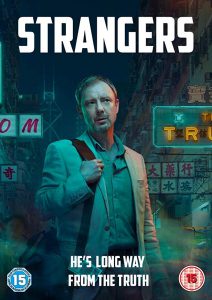 Strangers draws you in and you’ll likely enjoy the experience in the moment – but it also feels like a show that could have been written any time in the last two decades and brought to the screen with nary a single change to the script. There’s an urgency to the premise of the story but almost none in its execution. Every single thing – casting, editing, script and cinematography – is just a little… askew. The examples are plentiful: The police officer revealing Megan’s demise is spectacularly matter-of-fact in his delivery… Emilia Fox’s consulate helper is the opposite, just too available and informal… Jonah has so much thrown at him in the opening episode that he deserves to be ranting, raving, drunk and a weeping mess, but instead Simm plays him with a numbed, shambling confusion, as if the valium which miraculously handled his crippling fear-of-flying (another story-point needing to be there for the backstory to work but conveniently overcome in a matter of seconds)  is still working its way through his system. Equally, Wong’s wronged husband David is a father who should be even angrier about the revelations and loss, but instead reacts like it’s all a bit… well, inconvenient and distracting instead. On a tech-level, it also appears that episode writers Mark Denton and Jonny Stockwood have never owned a smart phone in their lives (last time I checked, voice-mail messages don’t partly rewind at the press of a button like a dictaphone.)

John Simm (who has made an art-form of looking like a tired, seething or just bewildered everyman as required), eastern stalwart Anthony Wong (Hard Boiled, Infernal Affairs, Beast Cops) and stoic, multi-tasking Silent Witness Emilia Fox are all fine in and of themselves and work with what they have. The production would certainly be less without their presence, but  it’s hard to tell whether Strangers is going to test or stretch them in any unpredictable way as they hit their marks.

The skeleton of the story hints at police cover-ups and international business corruption (the sheer presence of a professionally-sneering Tim McInnery confirms it!)  and the ‘whys’ of Megan’s demise are clearly linked to something more damning in the corporate world. There’s enough travelogue cityscapes,  intrigue and questions in the pilot to pull you back next week in search of answers, but whether there’s enough connective tissue and momentum to hold audiences for eight episodes is another matter. 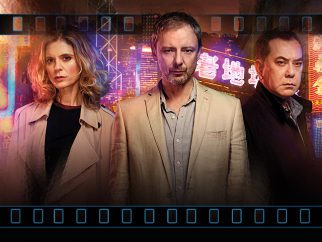