DO look now. There's much to admire in the generational house of horrors that built 'Hereditary', but its foundations are familiar...

Annie Graham (Toni Collette)  is an artist who lives with her husband Steve (Gabriel Byrne) and family in a luxurious multi-story house, an idyllic rural setting. Their lives are less comfortable emotionally – especially with the recent loss of Annie’s mother, the matriarchal Ellen who was known for her intimidating, no-nonsense attitude to family. Even at the wake Annie doesn’t gloss over the difficulties that turbulent relationship sometimes caused, while also acutely aware that her relationship with apathetic son Peter (Alex Wolff) and insular daughter Charlie (Milly Shapiro) is also far from perfect.

Annie spends much of her day creating detailed dioramas for prestigious galleries – sometimes miniature corporate scenes, sometimes  intricate elements of her own life – and finds it an excellent way to cope with the strain. But in the wake of Ellen’s death, the cracks in the family are beginning to show and when a further tragedy threatens to tear them apart, Annie begins to question her very sanity.

Despite grief-counselling, each of the family are dealing with their life, guilt and responsibilities in very different ways. A new potential friend, Joan (Ann Dowd) seems convinced a séance will allow Annie and her family closure, but instead it may swing wide the door to an attic full of terrible secrets…

Horror is a word used far too freely in modern cinema, generally encompassing a whole range of movies that can reach from basic template thrillers to grand-guignol torture-porn entries. When used more specifically and honestly, it’s a term that deals more with a less-easy-to-define, guttural reaction –  simply a sense of something becoming uncontrollably ‘wrong’ that can’t be corrected only observed. In that sense, Hereditary is absolutely pure horror, a film that is dripping with sheer dread, one that starts as something distracting and full of lowered voices… eventually becomes an all-out banshee howl. Some are calling Hereditary the scariest movie ever and that’s as true and false as those who made similar claims for The Blair Witch Project back in 1999. Neither film really fits that maxim nor benefits from over-selling the experience or bolstering expectations before viewing. They do however, each provide a masterclass in mood-shifts.

Hereditary is not so much a film concerned with making you jump – though it will –  but on making you shift nervously in your seat in awkward silence, occasionally raising your hand to cover your mouth and glaning towards the shadows – all good signs of a horror movie working its magic.  But it’s also a human and family story in execution, a Ken Loach meets Ken Russell experience if you will, that makes it more interesting, at least in part, as  a study in loss.

That’s not to say the film is perfect and some of the inevitable criticisms since its positive Sundance Film Festival debut are valid – as is the danger of over-selling or mismarketing. There’s an argument to be made that Hereditary is self-indulgent, inconsistent and relies primarily on the triumphs of tone and technique – for instance, using its dollhouse element as both on-the-nose metaphor and way to stylistically play with cinematic scale and depth. On that level Ari Aster’s debut feature as a director is surely to be applauded on a technical level at least: for both vision and often under-appreciated sound/audio, he’s dusted off an old toolbox of tricks and brought everything up to spec.  Clearly, Aster has sat down for a marathon of old-school delights such as Rosemary’s Baby, The Exorcist and maybe The Wicker Man and painstakingly noted what’s missing from and over-looked in modern movies. However, there are elements to the pacing and story itself that feel papered-over in service to that mood and momentum. The experience can draw you in (and does for the majority of the time) but when even a little off-target, there’s a sudden realisation of being manipulated in the moment, rather than being more satisfactorily deceived in hindsight. Hereditary starts as something subtle and loses some of that as we barrel towards its ending – a climax that will likely divide audiences. Like watching a carefully-restored car cresting a hill and starting a downward incline only to discover the brakes have been cut, its course starts to veer one way then the other and your interest shifts from appreciating the internal mechanics to wondering when the inevitable crash will happen and still not being able to turn away in time.

The casting is undeniably superb. Toni Collette, one of the best and often under-rated actors out there, once again plays the mother of an off-kilter child, but this is very much the flip-side of The Sixth Sense, swapping gentle maternal concern for brittle psychological familial fractures of her own. No-one’s face crumples quite as devastatingly well as Collette’s characters in a crisis and here there’s plenty of opportunity for her to look haunted in all senses of the word. Stage-actress Milly Shapiro as the young Charlie is quite amazing in the scenes she has, an unconventional performance that manages to be both minimal and magnetic – in often wordless scenes, she quietly dominates in the character’s isolation and awkwardness. Alex Wolff as Peter has more to do – or react to – and in some ways shares the weight of the film’s burden with Collette. He provides a convincing performance as a teenager in a personal purgatory, caught between caring too much and too little and making some very bad choices along the way.  Gabriel Byrne as the stoic father is less well-formed but perhaps the most sympathetic member of the family who is desperately trying to help everyone but slowly realising that he is out of his depth.

Over the last year the likes of performance-led Get Out and A Quiet Place have also had their profiles raised by bucking the trend of a more complacent market-place and perhaps these are all indicators that mood music can sometimes still be appreciated above the general noise. It’s worth noting that distributor A24 was also responsible for The Witch, It Comes at Night and Under the Skin, suggesting they are a genre powerhouse to be reckoned with.

There’s been much love for Hereditary, especially as a debut, but while recommending it above many other films,  I can’t embrace it with quite the same level of passion – amazing elements working better in isolation than as part of the eventual whole… and the tsunami of advance praise having perhaps coloured what to expect. Hereditary is definitely a powerful, so-slow-burn study in grief and a decent study in cinematic horror – but loses some of its unique shine when it finally has to put all its cuckoo’d eggs in one basket for a well-executed but somewhat explicitly old-school finale.  It’s very good in all sorts of ways but could have been truly great – and might still be deemed as such because of the lack of comparable competition in its field.  In being so, it has the potential to launch Aster to M. Night Shyamalan fame or M. Night Shyamalan infamy, depending on what he does next. 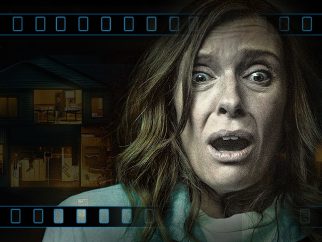