BFFs take on the CIA in this Sisterhood of the Travelling Agents...

Audrey (Mila Kunis) is drowning her sorrows with best friend Morgan (Kate McKinnon) after Audrey’s boyfriend Drew (Justin Thereoux) dumps her by text. In the midst of therapeutically burning all his possessions, she’s unaware that he’s actually dodging assassins in Europe. When he attempts to make amends on his return, their reunion is cut short when enemy agents target the apartment and before you can say ‘007’, Audrey and Morgan are on the run and determined to travel to Vienna to pass on complete Drew’s apparently dying wish to avoid an international incident.

However the ladies find themselves in the possession of a very important flash-drive and in the crossfire of an inter-agency rivalry and before long they are dodging bullets, hijacking cars and trying to work out who they can trust? Are bickering agents Sebastian (Sam Heughan) and Duffer (Hasan Minhaj) to be trusted and what about the priorities of their boss Wendy (Gillian Anderson)?  If the best friends can just survive the next few days as fugitives, captives and amateur spies, maybe they’ll get the answers they need…

The Spy who Dumped Me won’t win any points for originality or plot logic but it’s yet another solid romp showcasing the fact that a female-led comedy can be just as funny, vulgar and silly as any of the territory marked out by the men in previous years. Kate McKinnon is rapidly becoming the go-to gal for slightly-askew or outright outlier characters, those liable to say or do inappropriate things and do so with a care-free attitude that dares you to argue otherwise. The likes of previous SNL alums and mainstays such as Tina Fey and Kristen Wiig have gone on to show they can handle solid drama as much as punchy one-liners and though we’ve yet to see examples of McKinnon spreading her wings in such directions, only a fool would write it off. However for the moment, her sense of comic-timing has found a niche that threatens to steal most scenes she appears in if not really pushing her further or to better material.

To give Mila Kunis credit – and to be fair, McKinnon also, as she could easily have swung it further in her own favour – Kunis’ Audrey is allowed to keep the ‘straight’ dynamic fun and just about keep up in the partnership. Ostensibly, in similar movies, Kunis and Audrey would be the serious ‘star’ and McKinnon and Morgan merely the zany ‘sidekick’ but here they aren’t in competition with each other so much as willingly teaming-up to protectively parry any and all threats to the friendship. Most of us probably wouldn’t have to go far to find an equivalent – if somewhat less dangerous – friendship in our own social sphere and it’s somewhat refreshing to see sisters doing it for themselves and each other rather than the recent examples we’ve seen of opposites-forced-together but in competition (think, say, Bullock and McCarthy in The Heat).

Writer / Director Susanna Fogel doesn’t always get the story balance right and the film tends to unpredictably veer somewhat between outright OTT silliness and a heightened action flick. The ‘lets-go-to-Europe’ element at the start of the film requires a suspension of disbelief, but if you’re going to analyse it too much, you’re watching the wrong film. A good many scenes are pure slapstick, while others have more bloodier consequence ( a café full of people are not quite innocent collateral damage) and the film works best when it pulls back just a bit and lets the characters’ ‘I got your back!‘ dynamic play out to good effect alongside the more traditional set-piece stunts.

A pleasant placeholder entry for everyone concerned, The Spy who Dumped Me is template rather than tentpole, missing a few good opportunities to deliver something more tangible and offering charm rather than any surprises but it’s still good fun and worth catching at the movie-theatre, though it’s likely it will find wider success on DVD…

The Spy who Dumped Me is out in the US now and released in the UK on 22nd August. 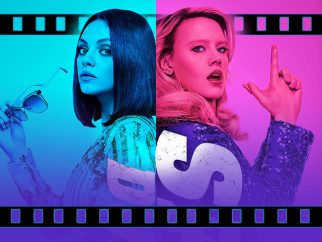