Historically imperative, but ‘Shock and Awe’ lacks both…

It's packed with stars and stripes, but at a time when the press is under fire, 'Shock and Awe' has a script rather than a pulse...

The morning of September 11th 2001 changed many lives, the terrorist attacks on the World Trade Center and the Pentagon and other targets by forces allied to Osama Bin Laden became a pivotal moment in history for individuals and an entire country’s place in the world. In the days that followed, many wondered just how quickly the response would come and what shape it would be, but when the US administration sought to draw attention to its long-time foe Saddam Hussein in Iraq rather than bin Laden’s forces on the Afghanistan/Pakistan border, the axis for the war-effort pivoted in an unexpected direction.

While many media outlets quoted the Bush administration’s assertions that there was a cohesive, provable link between the two terrorist leaders and that weapons of mass destruction would be found within Iraq’s borders, a handful of outlets, including the Knight-Ridder organisation (the second-largest news gatherer in the States) questioned the evidence leading to that conclusion. As the war effort gained speed, a select group of reporters tried to find the truth behind the motivations of those involved.  But with the rest of the media, the government and most politicians standing in lock-step with the agreed war-footing, would their persistence in demanding clear facts beyond the rhetoric be rewarded?

There was once a time when any Rob Reiner-directed movie would be a key release, often to be found with a mixture of aspirational wit and sly, subversive wisdom: think Misery, This is Spinal Tap, Stand by Me, When Harry met Sally, The American President and A Few Good Men.  For some reason which has nothing to do with the film-maker’s considerable innate talents, the last decade has seen less of a notable output. After 2007’s The Bucket List titles such as 8, And So it Goes and Being Charlie have hardly stuck in the memory.  2016’s biopic LBJ, with Woody Harrelson in the title role, was good but received mixed reviews.

Despite some serious star-wattage and undeniably one of the most important stories of the twenty-first century, Shock and Awe doesn’t quite have that engaging, slick momentum and pentameter found in, say, Aaron Sorkin’s work – the modern barometer of political prose, where the urgent walk and the passionate talk balance each other out perfectly. That’s not so much a criticism – style should never come before content – but it’s an observation that reeling off a list of facts often makes dry reading or viewing and Joey Harststone’s screenplay doesn’t do itself any favours in that regard. All too often Shock and Awe is anything but shocking or awestruck and instead feels like actors performing from transcripts or laying out positions in deliberately bullet-point layman’s terms. It’s personified by a dinner-date scene between Marsden’s Strobel and love interest Lisa Meyer (Jessica Biel) where she researches and then reiterates the history of the Muslim world and the geo-political landscape in sixty seconds… all in an effort to show interest in his reporting work. Instead of being wry and disarming it feels like the blatant infodump-device it obviously is. sadly, it’s not an isolated example.

Shock and Awe wants to be a contemporary All the President’s Men but instead feels like a competent television movie produced for a Midterm primary campaign, the politically-hued equivalent of a simplistic faith-based film where the hero’s unflinching faith and stance against boo-hiss dark forces is in journalism rather than spiritual. But, ironically, it seems to do exactly what it criticises the Bush administration for –  confirmation bias: setting out from a needed conclusion and then selecting the information and speeches to justify its hindsight.  It has righteous indignation in spades and an agenda, but is preaching to the converted and doesn’t feel essential. History has exposed the sleights of hand and conflicts of interest displayed by George W.Bush, Dick Cheney, Donald Rumsfeld and others in the administration of the time and Shock and Awe should be able to make that damning case from a passionate position of strength, especially given the way that the press corps has been attacked ever more viciously in recent times. Instead, rather than a rallying defence of the fourth estate and the pursuit of facts rather than opinion, it has a conveyer belt of scenes where people talk earnestly about the truth, justice and the questionable moral high ground… but in a way that will have you nodding and clapping politely from your seat rather than rising to your feet with the quickening of the heart. The film could have justifiably eviscerated some of its key players and instead it settles for solemn paper-cuts, a bully-pulpit and the occasional self-satisfied snark.

Harrelson (as reporter Jonathan Landay) is a hugely versatile performer – nominated for an Oscar this year for his superior work in Three Billboards outside Ebbing, Missouri – and has long since mastered his sardonic tough-guy-in-the trenches persona and James Marsden (as partner Warren Strobel) can do awkwardly earnest with his eyes closed, but while the script gives them good dialogue with each other, they’re no Woodward and Bernstein when it comes to the actual reportage. Milla Jovovich, as Landay’s foreign-born wife, offers some comments about hearts and minds and propaganda but Jessica Biel, a force to be reckoned with for The Sinner, is sadly little more than set decoration. Reiner himself pulls double duty not just as director but as Knight Ridder boss John Walcott and gives himself some of the chest-beating monologues about holding others to account. Tommy Lee Jones, the Mount Rushmore of actors, plays news veteran Joe Gallaway but essentially plays Tommy Lee Jones.

A passionate defence of the press, of factual information-gathering and the importance of holding those in power to account, could not be a more topical and relevant discussion – hence films such as Spotlight and The Post.  Shock and Awe raises valid issues that constantly need vigilance and examination, but the finished film also needs to be a rallying cry, not a mournful grumble and sadly, it simply doesn’t invest those much-needed titular attributes.

‘Shock and Awe‘ is released on 14th August 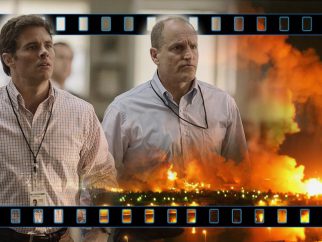