Netflix ‘Extinction’ isn’t quite DOA, but lacks a pulse…

There's some life in it, but 'Extinction' is trapped by tropes...

Peter (Michael Peña)  is having very bad dreams – where his city and his friends and neighbours are suddenly slain by an attack mounted by lights that come from the sky. His family (including wife Alice – Lizzy Caplan) and co-workers have tried to be supportive but the strains are beginning to tell and Peter is both concerned and tired by the visions of disaster. He takes the advice to go and see the company’s medical team but leaves the appointment abruptly when another patient claims to have had the same dreams and that the doctors previously just made him forget.

It’s the final straw for the supportive Alice but it’s just then when hell is unleashed on the city – bio-suited invaders, just like Peter’s dreams – apparently firing indiscriminately and killing everyone they see. Peter, Alice, their two daughters and their neighbours must find a way to battle out of their building and get across to the government facility where Peter works and which may be better defended.

Who knew the attacks were coming and what can the survivors do? Maybe Peter’s visions hold the answer…

Extinction is one of those perfectly adequate if hopelessly broad-stroked set of ideas that somehow ends up being a full-length film when it would be much better suited to be a short, Twilight Zone / Outer Limits / Black Mirror type tale – stripped down to basics rather than filling out its running time with scenes that betray its more loose logic and overtly familiar B-movie credentials. Spinning out of what must have been a zippy, one-line pitch and with the opportunity to cast familiar faces (Michael Pena, fresh from Ant-Man & The Wasp and Lizzie Caplan from Masters of Sex), the eventual script hits the requisite beats of the disaster-movie genre but also feels weighted down by a simplistic, template script and a tendency to fall into the unfortunate trap of making supporting characters react in certain ways only because they’ve read the script and know their pecking order. (The ‘We can’t evacuate hundreds of people from imminent danger because the above-the-title actor hasn’t got here yet, so let’s give him some extra time…‘ scenario that feels immediately awkward and artificial).

Peña drops his familiar fast-talking sidekick routine for that of a Joe Public blue-collar dad who is genuinely trying to do his best for his family but finding it hard to juggle his job – in a high tech government facility – with the need to spend more time with his wife and kids and it’s to the film’s credit that though he springs to his family’s defence, he doesn’t immediately become some sort of Jason Statham action hero when the stakes get raised. The flipside of that is noting that his boss is played by usual hard-man Mike Colter (Luke Cage, HALO) who is strangely limited to pen-pushing, words of manly encouragement and some necessary scenes of exposition for most of his own scenes.  Caplan’s role is disappointingly napkin-thin as the frustrated wife and really gives nothing from which the talented actress can build.

One step above a movie-of-the-week, it’s easy to see why Extinction looked good on paper but also why the original release plan into cinemas (through Universal in January) was ultimately shelved in favour of the later date on the  Netflix platform – frankly an ideal situation when the viewer can pause the production to go off to raid the fridge or liquor cabinet before resuming – and will not feel particularly guilty or distracted. Ten years ago this would have been ‘Straight to DVD’ – fun enough, butwithout the attention to detail or budget to fully exploit its bigger ideas. There are moments of ambition where the film has something to say and wants us to appreciate some of the bait-and-switch aspects of its story, but they are largely suffocated by an uneven script that meanders through various key set-pieces and then has the same problems with a satisfying conclusion and logical wrap-up as Netflix‘s other recent genre production How It Ends.  It’s a particular disappointment given that the script is penned by Eric Heisserer who at last gave us more to think about with the much more ambitious and wider seen Arrival. 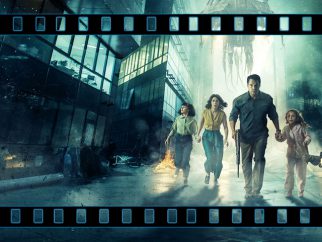 ‘Timeless’ gets wound up with a two-part finale…