The mission's improbable, but the spectacle is a big as ever...

Ethan Hunt (Tom Cruise)’s new mission, should he choose to accept it, is to stop the sale of three spheres of plutonium that could wreak havoc if detonated. What’s left of the IMF’s opposite numbers /nemesis-organisation ‘The Syndicate’ is infusing itself with an even more extreme set of zealots, ‘The Acolytes’ and there’s an ever-increasing danger of global chaos.  However, the mission goes awry and Hunt must choose between success and the life of fellow agent Luther (Ving Rhames) and he chooses the latter.

It’s a decision that may cost everyone dear. Faith in the IMF has apparently never been lower and  other law-enforcement agencies – the CIA, MI6 etc – are wanting to step in.   Commander Erica Sloan (Angela Bassett) insists that the IMF team either stand-down or work with her agent August Walker (Henry Cavill) to retrieve the plutonium, uncover the identity of a suspected traitor and save the day, but even with the extra firepower and Benji (Simon Pegg)’s top tech, it could be a tall order.

As the trail takes them by land, sea and air to Berlin, Paris, London and the Middle East, it becomes clear that supposed allies have their own conflicting agendas and ideas on how to get the job done and are willing to kill to get the job done. Will Ethan and the IMF have to compromise some of their beliefs and conduct to save the many?

Just as James Bond decided to give an earthier hue to its 21st century incarnation, the crew of the IMF continue go the opposite way, skewing ever more louder and prouder. The original Mission Impossible series dealt with a team with the ability to get in and out of the most dangerous locales, defusing situations and vanishing as if they were never there. The modern  version foregoes subtlety and more often that not leaves bullet-holes, craters and debris as its calling card. It’s all about the spectacle. Logic takes something of a backseat. This time the initial mission to reacquire three balls of plutonium goes south largely because of an obvious distraction, Walker’s Parisian dead-drop from above nearly fails because of his ego and Ethan’s fighting skills seem to be a mixture of sheer persistence and his ability to keep hitting people’s fists with his face and body. Whether it be impacting the ceramics of a restroom or skidding across  the tarmac of Paris, it’s amazing Ethan Hunt is even able to stand, never mind run, but by now he’s the Energizer Bunny of Espionage. It might be a badge of honour and marketing rather than actual necessity to have Cruise apparently do some of the main stunts (including in the now infamous ankle-breaking jumping tall buildings in a single bound) but they are still executed with panache and with as much flair and suspension of disbelief as the summer tentpole format allows.  To his credit, it’s increasing impossible to believe that Cruise is fifty-six years old, never mind being so up close and personal with the stunt department, but he throws himself into things (literally) with the eagerness of someone half his age.

There’s an interesting construction at work here – amazingly co-ordinated set-pieces with, as Pegg’s Benji himself admits, a severe case of ‘making it up as we go along’… a black-belt in shrugging the blueprint, if you will. As an action movie, Mission Impossible: Fallout delivers spectacularly on a technical level, providing all the set-pieces and exotic locales one needs, the first two thirds of the movie essentially darting around Europe with no real rhyme and reason but plenty of friend-or-foe firepower. Director Christopher McQuarrie’s double-duty on the script may never come close to scaling the heights of his Usual Suspects screenplay, but it infuses each fist-fight, shoot-out or chase with bone-cracking testosterone, timing each blow to an almost orchestral precision of organised chaos that could only be bettered if someone had seriously considered cutting about a quarter of the over-all running-time (nearly two and a half hours in total).

The film pretends it wants to be about more than that bullets and bravado, touching on how the decisions we make and the people we meet affect us and others – with callbacks to previous chapters in the franchise and the hard choices Hunt has had to make for the sake of the many, the few and the one. It’s clear Cruise and McQuarrie embrace their franchise history and draw on the group dynamics to keep us invested.  But it can never quite quit the addiction of spectacle, the sheer rush of wanting to squeeze every second of screen-time out of its boot-camp mission-prep and always returning to the shock and awe as punctuation the when the chips are down. It would be petulant to criticise that too much – by now we know what we’re getting and it’s our choice to accept it… however there’s something equally as satisfying when the plot momentum takes a brief breather and calls for the more delicate and quiet sleight of hand. It’s all utter nonsense, of course,  and it’ll be surprising if the ‘surprises’ truly catch you off-guard. The mountains of contrived connections and extended exposition that would sink a lesser enterprise are delivered with straight-faces and enough conviction by an ensemble team who can do this sort of things with their eyes closed.

Man-mountain Henry Cavill and his moustache of justice remain stoic throughout but run the risk of making his character about as interesting as a shiny, streamlined gun when it’s not being fired. He remains stuck in placid or grumble modes with occasional bouts of hitting anyone whose mother isn’t called Martha. From start to finish, Pegg predictably provides some of the best sardonic one-liners and it’s nice to see Ving Rhames getting a few more minutes of screen time in this chapter. Sean Harris as nemesis Solomon Lane is largely the malevolent maguffin of the piece, simply required to sneer and snark and smack around, but he manages to make his returning nihilistic terrorist as creepy and unpleasant as you need.   This MI6-titled movie sees Rebecca Ferguson’s MI6 agent Isla get the best of the female roles, doing well with both the physical action and dialogue with Vanessa Kirby smouldering as the ruthless  ‘White Widow’ arms-broker (sauntering in and out of the movie as if she was on loan from another) and Michelle Monaghan being  purely supportive and understanding in little more than a touchy-feely cameo as Hunt’s ex, Julia.  Angela Bassett and Alec Baldwin are essentially the exasperated counter-intelligent parents having to pick up the mess their agents are leaving behind.

Mission Impossible is what it is, the DNA-honed love-child of classic James Bond and the modern Fast and the Furious and by now it sets the benchmark in turning the brain off and simply enjoying the planet-spanning rollercoaster. As always… you choose accept the mission, light the fuse, stand well back and admire the ensuing fireworks.  On that level, Fallout goes nuclear and falls perfectly in to place as the lynchpin of the summer. 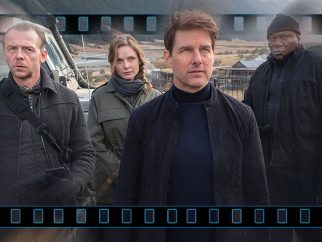