This year, insects are the welcome guests of summer as Marvel hopes to bide its time between Infinity Wars...

Ex-con and sometime adventurer Scott Lang (Paul Rudd) is days away from completing his two years of house-arrest after illegally helping the fugitive Captain America (during the events of Civil War). But a strange vision of the sub-atomic world he barely escaped during his first outing in the insectoid super-suit leads him to make an illicit phone-call to father and daughter Hank and Hope Pym (Michael Douglas and Evangeline Lilly, respectively) who have also been on the run ever since.  Could the dream-like experience mean that Hank’s wife, Janet (Michelle Pfeiffer) – missing in the microverse for decades – is actually alive?  Scott, Janet and Hank are willing to risk everything to find out…

But with their window of opportunity growing short, the FBI watching for any breaching of Scott’s agreement, a hustling rival wanting in on the Pym’s technology AND  a strange ‘phasing’ figure known as ‘The Ghost’ shadowing their every move, can the team survive all the converging threats to ‘go big’ as well as ‘small’ using their ground-breaking tech…

It wouldn’t be a typical year unless Marvel had at least two heavy-promoted blockbusters in cinemas and after the epic-feel of Avengers: Infinity War, it’s back to basics with a follow-up to 2015’s diminutively-sized-by-comparison Ant-Man. Once again directed by Peyton Reed (who stepped in to the original when Edgar Wright bowed out due to ‘creative differences’)  Ant-Man and the Wasp is a bit broader and more assured than the first film. However it doesn’t stray too far from basic expectations – it feels fun but somewhat lightweight, a film that’s just unapologetically hacked the secret to template tent-pole success and decides to play it strictly by those numbers: pace, but no real surprises, zippy, predictable banter rather than heartfelt monologues and one eye / antenna on fast and frenetic set-pieces. After the more somber and cosmic note struck by Infinity War, this is a deliberately lighter affair, a street-level romp that wants to distract and entertain rather than ‘thrill’. To that extent it’s perfectly fine and a fun comedy drama, if not one that is particularly memorable in the broader landscape.

Though there’s little sexual chemistry between them – any hint of romance feels almost obligatory rather than organic – Rudd and Lilly make a good amiable team, able to physically hit all their marks and fire off sassy one-liners at each other and clearly having a ball.  Ironically and not without notice, it’s Lilly’s Janet/Wasp that proves the far more competent crime-fighter than Lang’s  by-the-seat-of-his-ants hero. Michael Douglas knows he’s the elder-statesmen and acts accordingly, frowning and rolling his eyes at the youngsters’ attitude.  There’s an effort to suggest a slightly darker or at least less responsible research in Hank Pym’s past with others paying the cost, but  it’s largely lip-service and nothing that comes close to the domestic-abuser that the comics eventually gave us. At worst, Douglas’ Pym is a frustrated curmudgeon and old-school scientist rather than the carefree con-man he sees in Lang. And though Michelle Pfeiffer’s screen-time is limited as the quantum-annexed Janet van Dyne, she’s still stylish and charismatic after as many decades in the business and still oozes that confidence in every scene she’s in.  Laurence Fishburne starts out as a moral compass, another veteran to add weight to proceedings and Yorkshire-born Hannah John-Kamen as the enigmatic Ava / The Ghost gives her character an exotic quality and a solid reason for her actions rather than being just a de facto antagonist.

But there’s a little too much going on here, almost an Iron Man 2  level of over-stuffing proceedings with too many characters and sub-plots colliding. Walton Goggins sneered his way through the recent Tomb Raider reboot as a guy with his eye on the profits of exploiting powerful technology and here he’s largely asked to repeat the process here, albeit in a slightly better suit. The problem is that he doesn’t really come across as the dire threat the film desperately needs, more a mid-level sleazy opportunist and ultimately it’s a sub-plot surplus to requirements, simply an extra element to stir things up and give the film a few extra scenes and minutes for its running time. Michael Pena is given more screen-time as motormouth Luis with hit and miss results and perhaps proving that sometimes much less is far more, even when sharing the pratfall comic-relief with his security-business comrades. Judy Greer and Bobby Cannavale are Scott’s ex-wife and her current husband and it’s good to see the film doesn’t revert to a ‘flawed step-dad / awkward relationship’  formula, instead making Scott’s extended family fully supportive and giving his daughter Cassie (Abby Rider Fortson, hereto best known for a CPAC commercial) a cinematic poppet persona that isn’t anywhere near as sickly sweet as she could have been.

The set-pieces make the most of the creative possibilities in the big/small transitions, including people, cars and entire buildings, with some of the best visual moments (including a gigantic, hurtling Hello Kitty PEZ dispenser) already glimpsed in the trailers.  San Francisco’s windy streets are used for the umpteenth time on screen, though at least the requisite urban car chases have added ‘scale’. The fight scenes are speedy and kinetic with some good mix of visual effects and stunt-work / fight choreography from everyone involved.

There’s stakes here, but they don’t feel very high despite the life-and-death factors and it all feels like a story tumbling along, looking for something evil to fight and making do with fisticuff brawls and acrobatic bullet ballets. An undeniable placeholder and palette-cleanser for Marvel‘s larger-scale, larger-gambit ‘Infinity‘ movies, your enjoyment of Ant-Man and the Wasp  will largely rest on your expectations with the film doing pretty much exactly as advertised – no less and no more. Size matters, but not so much. Fun enough for the family, the film is full of sitcom misunderstandings and prat-falls with the underdog once again the hero –  and  reaffirms the Marvel  game-plan, acting as a cinematic comma rather than pushing it in any new directions.

For completists, there are technically two extra credit-sequences, though only the first, mid-credits piece is worth staying for, largely for its  tangential nod to Infinity War. 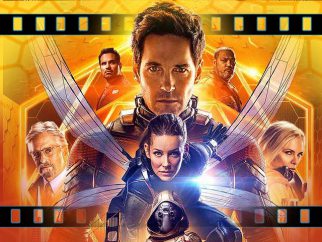