Netflix's zombie film 'Cargo' gives Martin Freeman another chance to show his range, this time in the Australian outback...

Andy (Martin Freeman), his wife Kay (Susie Porter) and their infant daughter Rosie drift down the Murray River in Southern Australia in a small houseboat – keeping well away from the banks and the dangers that the barren wastelands on each side offer. The world has gone to hell, but all they want to do is survive it. However their food is running low and will run out long before they reach the potential safety of a military base several miles downstream.  When they spot a small grounded yacht, Andy manages to retrieve some supplies to sustain them but when Kay makes a second trip, things do not go as well.

Now the family have no choice but to leave the relative safety of their makeshift home and go in search of medical supplies, but uncertain of what will happen, Kay makes him promise to do everything necessary to save Rosie.  As things rapidly spin out of control, Andy finds he has to make some important decisions about what to do, whom to trust and what chances to take – all in an environment that punishes the slightest mistakes.

Over the next forty-eight hours, Andy will find new friends and enemies and find himself tested to the extreme as he looks to the best way to secure Rosie’s future…

In recent years, Martin Freeman has totally cornered the market in confused and bemused, raising a quizzical eyebrow and heavy sigh at a whole raft of obstacles his characters face. After a string of lovable everymen in the likes of The Office,  Nativity! and The Hitch-hiker’s Guide to the Galaxy (as Arthur Dent)  he made an even bigger name for himself in productions such as Sherlock (where he essayed Watson), Peter Jackson’s Hobbit movies (where he was Bilbo Baggins) and recent Marvel movies (where he’s the competent but noble pen-pusher Everett K. Ross).

It’s been more rare to see him in a truly darker role though when he does its very effective. The recent anthology Ghost Storiesmemorablysaw him being haunted. He certainly made an impact as duplicitous murderer Lester Nygaard in the first series of FX show Fargo and though Cargo has a similar moniker, the darkness displayed in one of the latest slate of original Netflix television films is a notably different kind.

If there’s another through-line with Freeman’s gallery of characters, it’s a kind of impressive determination and grim desperation in the face of adversity.  In this case Cargo gives us a man with the most important mission of all: saving his infant daughter at any cost. It’s a compelling journey through frustration, anger and abject despair and while it has its moments of humour and hope to stop it becoming merely a tragedy, the film puts the central cast through the wringer on the way. As in all good dramas, you’ll be rooting for survival.

Cargo is not an easy film to watch, but it is a good one if a little uneven in parts. It’s hard to make a ‘zombie’ movie in an era where it seems almost every necrotic vein has been tapped, so Cargo doesn’t seek to reinvent the genre, it merely shifts the focus to the truly human cost. Despite obligatory moments of violence and gun-play, this isn’t an action film. It has more walking-and-talking than an Aaron Sorkin show, but a decidedly higher body-count. In fact, this is a project that is more a study in survivor guilt and sorrow, closer in tone to Arnold Schwarzenegger’s unexpectedly subtle and ultimately under-appreciated 2016 indy Maggie  than the now predictable bloody yardsticks of latter days The Walking Dead or even the Romero era.  The undead here are shambolic but deadly, reactionary rather than vindictive, carriers of a virus that is as slowly debilitating as it is cruel, reducing its hosts from functioning humans to walking infections over the course of a few days. They don’t chase and charge, but they will punish you horribly for careless trespass. There are rules  to the nature of the threat in this story, but they are reasonably realistic and organic rather than too fantastical.

The characters may be familiar apocalyptic archetypes but they’re distinctly human – for better or for worse. We meet people who will do anything to survive and those who refuse to lose their humanity in the process.  Some thrillers have their characters make silly mistakes to artificially drive the tension, but though Cargo has people making some overtly-risky moves (with horrendous consequences) for which you want to yell at the screen ‘Don’t do it!!!!‘, a majority of the ‘mistakes’ they make are at least driven by familial love and naivety rather than blatant stupidity. However fate remains fickle and largely unforgiving.

There’s an argument that the low-budget short movie (made by the same team of Ben Howling and Yolande Ramke) that inspired the feature-film length Cargo (and which went viral in 2013) was more concentrated in its idea than than this longer adaptation, but that’s not to take away from the latest version which invests in better cinematography (the landscape being a character in itself) and opens up the dusty canvas, bringing in the feeling of a wider world. Though the pacing sometimes meanders, Cargo has all the ingredients to become a convincing slice of  post-apocalyptic Australian cinema –  a consistently potent subsection of the horror/thriller genre (a large marquee that covers everything from Razorback to Picnic at Hanging Rock to Mad Max) and one that has been empowered by Oz’s unique and ongoing clash between the modern steel of its shiny cities and the wild, wide  beautiful but desolate natural landscape they usurped and which is never more than a few miles away.  Cargo doesn’t hide that familiar environmental and cultural message: that those who disrespect nature and abuse it are far more likely to be its first victims when it somehow strikes back. Here it’s the indiginous that are the most ingenious, the Aboriginal people treading the most carefully and recognising the wind-change in society.

Not highly original in its elements not pushing specific boundaries, Cargo nevertheless has the kind of heart, soul and a real pulse missing from many a horror outing and this superior thriller from Down Under definitively comes out on top… and proves yet again that Netflix is now a major feature-film provider and platform.

Cargo is now playing on Netflix… 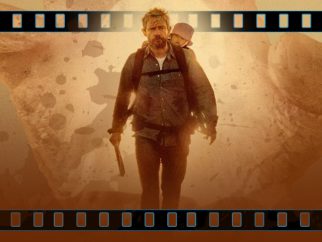