A brutal story of justice, grief and one woman's war against possible police inefficiency... 'Three Billboards Outside Ebbing, Missouri' takes no prisoners...

Mildred Hayes (Frances McDormand) daughter was murdered seven months ago. Not just murdered, but raped and burned and left on the side of a country road. The police haven’t found her killer and however horrific the crime, the town of Ebbing has slowly moved on.  But Mildred can’t and as she sees the case growing colder each day, she becomes colder herself, determined to keep the story alive and the investigation ongoing.

A blunt woman who always speaks her mind, tragedy has not dulled her edges – quite the opposite – and it’s lost her some support among her townsfolk. She doesn’t care. In an effort to light a fire under the local police force and its Chief (Woody Harrelson), she rents three billboards outside the town. Their message is clear: “Raped While Dying.” – “Still No Arrests?” – “How Come, Chief Willoughby?”

Willoughby, facing his own personal tragedy, understands her pain but can do little to placate it. But as Mildred’s campaign begins to touch everyone in the community – for better or worse – she’s going to find friends and enemies lining up in unlikely ways…

There was much anticipation for  writer Martin McDonagh latest film. Its release into cinemas in the dying months of 2017 and its release onto DVD in early 2018 in the US (now followed by the UK release), all amidst righteous talk of multiple award nominations, pointed to a film that was definitely going to make its mark on a cinematic landscape. Perhaps it’s the fact that 2017 was a year otherwise littered with disappointing box-office, over-reliant post-production effects and safety in convention, but whether it is on its own merits or simply how superior it is to almost everything else out there, Three Billboards Outside Ebbing, Missouri definitely leaves its mark.

McDonagh’s movies are as infuriating as they are delightful. Often crude and vulgar, they have a tendency to push awkwardly against expectations and format, not always giving the viewer everything they want or expect.  Occasionally some narrative zigs and zags in other rough diamonds such as In Bruges and Seven Psychopaths have felt swapped in for that sole wrong-footing purpose, rather than the stories themselves,  but those stories – tall, weird and wonderfully dark – encapsulate the ‘journey not the destination’ principle. They are a mixture of scattershot presentation and military precision, ultimately pulling out the rug from underneath the audience and giving them a memorable rollercoaster ride where it’s genuinely difficult to predict the direction. Achieving that in a satisfying way in the modern mainstream movie business, where familiar template and structure are everything, is rare – rarer still to rise above stunt chain-yanking and cultural snark to make people actually care.

Those wanting a straightforward story may not find everything they require in the film. It’s an earthy take-no-prisoners study of massively dysfunctional people and the deeply personal decisions they make when facing unspeakable tragedies. The script, the direction and the performances slide down like moonshine – in turns making you cheer, cry and grit your teeth and evoking a pain that makes you smile and a humour that makes you weep.

McDormand’s Mildred is a woman who can’t forgive herself for past choices and therefore sees no reason to forgive others their current ones. That makes her both brutal and brittle, dangerous and demanding – from her own perspective, a cornered animal with absolutely nothing more to lose, though there are others in her orbit who disagree.  McDormand knows good material when she sees it and is simply mesmerising, making us angry for her and at her in equal measure – the film giving her the best leading role since her Oscar-win for Fargo and reminding us of just how good a performer she can be without ever making it look like a performance. Her Oscar for this role was well-deserved.

Though he just missed out on an individual Academy Award, Woody Harrelson also gives a nuanced turn as Ebbing’s chief of police. As Bill Willoughby he is both noble and flawed, a man frustrated by his genuine inability to find Angela’s killer but facing more immediate personal battles in his own life. Willoughby may be the billboard/poster-boy for Mildred’s campaign but he never sees himself as an adversary – ironically, of all the people in Ebbing, he might understand her the best, even when his patience with her actions is wearing thin.

Sam Rockwell  – who ultimately took the Oscar for Actor in a Supporting Role, adds another great character to his list of cinematic outliers. His Officer Dixon is a casual racist but it’s to Rockwell’s credit that he takes what could have been a prat-fall caricature and gives it an edge and journey that’s worth watching.

These are just the mainstays in a film that may not  be perfect nor suit every taste, but one that doesn’t have a single bad performance in its running time. Almost every named supporting character has a moment to shine, simultaneously exposing their ignorance and sage outlook, their chrome and rust in equal measure. A gloriously loud, sometimes shocking and messy maelstrom of bitterness, one-liners, gallows humour and grief, Three Billboards… is not only McDonaugh’s best work to date, but one of the best films of the entire year – balancing a rage against the machine with a quiet weathered observation of the human condition.

With added profanity and midget jokes.

Who could ask for anything more?

‘Three Billboards outside Ebbing, Missouri‘ is released onto DVD on 21st May in the UK  and is already available on DVD in the US. 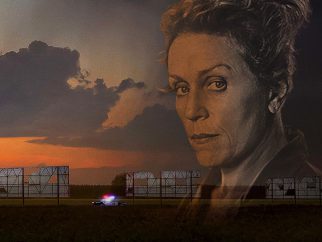