Swapping the dry outback for the humid rainforest, Jane Harper's second novel is another tale of Aussie intrigues...

Several days ago, financial giant BaileyTennants ran one of their semi-regular ‘bonding’ weekends in the Giralang mountains near Melbourne, Australia. One set of five women and another of five men went off, separately, on hikes where they followed markers and maps to get to their nightly camps and destinations. But though the five men came back, the days and hours tick by and there’s been no contact with the five women: Alice, Jill, Bree, Beth and Lauren. It seems they never made it to even their second night’s camp.

Then they finally appear – but there’s only four of them returning. Alice is missing and soon there are many people wanting to know what happened and working out how best to look for the missing member of the team. That’s especially true of Melbourne detective Aaron Falk and his new partner Carmen Cooper who were using Alice’s knowledge of the company’s activities as a whistle-blower to gather secret files and incriminating material. Their superiors’ case hinges on Alice’s evidence but without it – and her – the investigation risks coming off the rails. A missed, disconnected call from Alice’s dying phone to Falk’s own phone has only two words  ‘…hurt her…’.

Falk and Cooper must head up to the mountains and deep into the rain forest route to talk to the returning women and to try and piece together the events of the last few days. As hope of finding Alice alive seems to ebb away, there seem to be more questions than answers. But one things is clear, their investigation is only one reason someone might want to do Alice harm…

Favourite writers and their incoming latest books are always a cause for excitement, but every so often I’ll try and pick up a book by a new or unfamiliar author and test new waters.  Such was the case for Jane Harper’s The Dry. Published in 2016, I found it on the shelf at Barnes & Noble last year and it was an impulse purchase that immediately paid off, drawing me in.  On its release it was rightly seen as a truly impressive debut, winning such awards as the Gold ABIA for Best Book of the Year and the British Crime Writers’ Association Gold Dagger. Its contemporary tale of a murder in a small drought-ridden Australian town struck all the right notes: interesting characters, dramatic situations and a compelling, unraveling  backstory and mystery full of twists, turns, red-herrings and slow but sure revelations.  It’s already been picked by by Reese Witherspoon’s production company for a potential big screen adaptation.

Second books are often as problematic as the first. Getting published is hard enough but living up to that initial acclaim and literary benchmark can be equally daunting. Harper wisely decides on a variation a theme: the foibles of people echoing… well, the forces of nature around them.

While The Dry split its story between the secrets of a childhood past and the dramatic events of the present, Force of Nature divides its narrative between the ‘present’ and the events only a few days earlier. It’s an effective template that Harper has been honing – revelations, backs-stories and misdirections being drip-fed to the reader as a way to pay-off a mystery or set one up as we swap between two time-frames: here, the events of the fateful hike and the ever-increasingly desperate police search for the missing Alice.

There are certainly echoes of the classic Australian novel (and famous film adaptation) Picnic at Hanging Rock in earlier chapters – the human-versus-nature dynamic and idea of an unexplained vanishing in the wilds of Australia and its aftermath is a wonderfully primal conceit from the outset. However, this is ultimately a satisfying and more a character-led procedural less about a mythical mystery and an explanation by tome’s end.

Behind its suitably mysterious cover – at least the moody, rainforest-hued version (a more golden-coloured version showing fields of corn and a solitary farmhouse seems to have come from a designer who hasn’t read a single sentence of the manuscript) lies an intriguing, high tension, high-humidity tale of a fractured sisterhood, conflicting corporate agendas and dangers from without and within.  Aaron Falk is a potentially interesting ongoing character:  his memories of adolescence were an alternating dark and warm,  compelling touchstone in The Dry. He’s still suffering the repercussions of the previous novel’s emotional and physical climax here and Harper takes us inside his motivations to get some more momentum in his life now he’s returned to duty. But in Force of Nature there’s a sense that he’s almost an observer to intriguing events, our guide and suspicious inner voice, rather than a great investigator able to solve the case. The Dry‘s story was a personal one for him – this is much more a case of a simple professional connectionl, though it triggers some familial regrets that punctuate the story.

The five lost women at the heart of the tale are an interesting bunch – though none of them are entirely likeable – especially Alice herself, an abrasive personality whom it seems likely would have terminally alienated her professional peers long before the weekend. Good drama always comes from conflicting, conflicted personalities forced together but even though Harper writes well, there’s perhaps a few too many characters to keep track of and – arguably – in the early stages a reader may have to keep checking that they’re differentiating the characters of Bree, Beth, Jill, Lauren and Alice herself well enough.

Not quite as compelling as The Dry but still showing a classy style and a twisty mystery, Jane Harper has another winner on her hands and with a third book, The Lost Man, due out in Australia in late 2018 (and the UK and US in early 2019), her position as a rising star is well deserved. 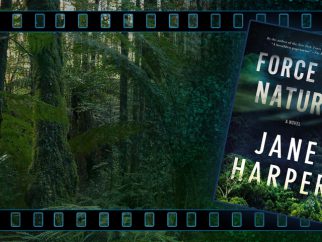