It’s Ohio, 2045, though geography and time probably have little of importance as most people are focussed on the virtual-reality of the Oasis, a global network that offers an alternative to their often humdrum existence. Why go to a boring desk job if you can journey to any landscape, create any encounter or experience any event at the click of a button? You can collect virtual currency and increase the depth and longevity of the experience and purchase better and better motion-capture software – so it’s not surprising that most of the population does so. The Oasis was created by futurists James Halliday (Mark Rylance), Ogden Morrow (Simon Pegg) who fell out over the best use of their creation and now Halliday has died… but that leaves the Oasis with one last puzzle to solve.

Somewhere in this vast, almost limitless matrix of colliding adventures, Halliday has hidden three ‘keys’. Brought together, they will give the owner sole possession of the Oasis, making them the world’s richest person and allowing them to do with it what they please. It will require skill, spirit and a certain approach to life to find and use them and so far billions of people have failed to crack his clues. But they continue to try.

In the slums of Ohio, Wade Watts (Tye Sheridan) aka ‘Parsifal’ is searching for those holy grails. He absorbs every detail of Halliday’s life that he can, desperate for a way out of his dead-end life. Each time he enters the initial road race that everyone seems to think is the starting point for the quest, he fails  – hobbled at the last hurdle (taking the form of King Kong). Even the legend that is Art3mis (Olivia Cook) can’t get past it and it’s Wade’s efforts that stop her from literally crashing and burning alongside her VR speed-bike.

But then Wade has a revelation, a singular idea that proves to unlock that first key and soon Wade, Art3mis and their friends Aech (Lena Waithe), Sho (Philip Zhao) and Daito (Win Morisaki) find themselves on a scoreboard of destiny. Now they are being pursued by forces both virtual and all too real, many who will stop at nothing to buy or simply delete the competition forever. With everything to (literally) play for, the future of the Oasis and the world is up for grabs…

It is no mere coincidence that a film containing a Guinness Book of Records‘ level of Easter eggs hit international screens on Good Friday.

With most films one can see influences and point to them, gauging whether the latest title is highly original, highly derivative or somewhere in between. It’s unlikely that anyone watching Ready Player One will have the time to spot the myriad visual punctuation that litters each and every frame like a cross between testosterone and pixie-dust, making the most recent cross-genre mash-up, the Lego movies, look like amateur night at the lost and found. Almost every background pixel references something from the last fifty years of pop-culture and the result is so much of an avalanche that there’s little point in resisting its momentum. Lara Croft, Batman and Freddy Krueger have blink-and-you’ll-miss-them cameos, the 1960s Batmobile, Back to the Future DeLorean and A-Team van  put the pedal to their mettle with King Kong, Mecha-Godzilla and the Iron Giant all having a moment in the spotlight.

Ready Player One feels like mainlining pop culture straight to the vein – with all the pros and cons that suggests. Arguing that the set-pieces go on too long and sometimes become just flying computer code is true but probably a pointless exercise, like suggesting there’s too much profanity in a Tarantino film or up-skirt shots in a Michael Bay outing. Ready Player One makes no secret of its mandate and from the first frame gets ready to deliver on its potential. Though the pacing could be better, there’s a lot of sheer fun squeezed into just over two hours of running time.

Not so much a deliciously nostalgic banquet, more of an epic, messy retrospective food-fight, but in the moment the world of the Oasis is a surprisingly satisfying self-referential dessert and gilded guilty pleasure…

Narratively, this is Willy Wonka by way of Tron, Wreck it Ralph by way of the Matrix, a deliberately if deceptively simple plot embroidered with the delights and detritus of over three decades of icons. A film so packed that it really needs to be seen on the big screen, it has a remit to play to attract an audience revelling in nostalgia while still attracting a younger clientele as well. (That being said, the lengthy Shining homage doesn’t pull its punches).

Last year’s Spielberg heavyweight was The Post – well-acted and worthy but inherently dull. On the other hand, this feels like Spielberg deliberately swinging the pendulum as far as he can in the opposite direction, producing an almost LSD-RPG cocktail for Ready Player One to counterbalance The Post‘s valium. Just managing to acquire the necessary legal rights for everything on show here probably deserves an Oscar in itself.

Sheridan and Cooke are decent leads, managing some chemistry in both the virtual and ‘real’ world and the shifts between those two realms generally work well. Sheridan’s Wade is more enthusiastic than he is heroic, though the idea that in this post-modern, multi-cultural metropolis that Cooke’s Art3mis should be bothered by a barely-there real-world birth-mark seems strange). Ben Mendelsohn, most recently seen as the ambitious middle-management nemesis of Rogue One, essentially repeats the role here with all the requisite surface-tension sneers and boo-hissiness needed of an enemy destined to be spectacularly thwarted before the closing credits but cause much gnashing of teeth on the way there. T J Miller provides the voice of nicely-pitched acerbic henchman I-R0K and the supporting cast all appear to be having a great time.

Adapted with flair by Zack Penn and Ernest Cline (from the latter’s original book), there’s various messages here: about forging ‘real’ relationships and that self-image shouldn’t rely on online avatars as well as creativity being more than just about branding and money-making… though there’s an argument that the film has its cake and eats it by both celebrating the all-consuming world of entertainment and simultaneouslywaving a cautionary finger at its excess. Ready Player One isn’t perfect, but it does have that quality which suggests that it’ll be a landmark movie of sorts for some time to come – not so much in influencing or reinventing what comes next (a la the truly groundbreaking Jurassic Park or Avatar), but in planting a flag and asking people to look back in wonder at its truly expansive back-catalogue of achievements to date – and what a back catalogue it is. Not so much a deliciously nostalgic banquet, more of an epic, messy retrospective food-fight, but in the moment the world of the Oasis is a surprisingly satisfying self-referential dessert and gilded guilty pleasure.

Ready Player One is on general release now from Warner Bros. 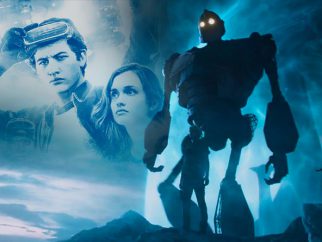