It could have been DOA, but the Flatliners remake is kept on life-support by familiar faces...

Nearly a decade ago, Courtney (Ellen Page) lost her young sister in a car accident caused by Courtney being distracted by her cell phone. It’s an event for which she’s never truly forgiven herself, but it did spur her on to become a doctor and to try and save lives.

But in the emergency back-up facility in the basement of the hospital where she’s a student, Courtney is about to push the boundaries of her chosen field – both practically and ethically. She wants to know what happens in the moments after ‘death’ and decides the only way to do that is to stop her own heart and try to recreate the ‘near death’ experiences that some people report after they are resuscitated.  She intends to reproduce that effect and manages to talk her colleagues into keeping her secret.

Her attempt nearly goes horribly wrong, but Courtney is revived and not only talks of a fantastic sense of empowerment but also demonstrates her mind is forming new connections and more speedy recall. It’s a process that colleagues Marlo (Nina Drobev), Jamie (James Norton), Sophia (Kiersey Clemons) want to emulate, even if fellow student Ray (Diego Luna) preaches caution.

But Courtney and her friends soon discover that the positive effects come at a price… and past sins appear to be coming back to haunt them… literally.

Those old enough to remember the original Flatliners may wonder what a new version of the story has to bring to the operating table. The truth: not much except a glossier texture and a millennial mandate that will keep pulses moving if not exactly racing. There are worse fates…

If there’s an undeniable Final Destination vibe to proceedings – essentially beautiful people being threatened by potentially ugly fates rather than specifically named boogeymen – then that’s a successful template that has almost become a sub-genre of the horror format. Though there are morality lessons here about the nature of revenge, redemption and even self-image, there’s not much deep insight to be had beyond the poster.  We learn that each of the doctors have significant regrets, but though they involve actual death and drama, they feel like first-world problems. Without wanting to dive too deeply into the revealatory nature of the visions that each of the would-be doctors endures, these beautiful people have the kind of CW-angst that doesn’t really require angry spirits and cosmic karma – more a reassessing of their basic priorities.

To be fair, it’s a criticism that was made of the original outing which also has its fans and foes. Schumacher’s 1990 movie was an acceptable release with quite a powerful premise and potential, but with a remit that was more of an excuse to unite an alternative brat-pack of ‘hot’ young stars (Julia Roberts,Kiefer Sutherland, Kevin Bacon, Oliver Platt and Billy Baldwin) than really mine the supernatural potential. It’s probably more memorable for the tabloid headlines generated when Sutherland and Roberts then engagement collapsed between production and release, than being a box-office winner. Like regrets, the older reviews are something given context by hindsight.

That being said Niels Arden Oplev (who helmed the original Girl with the Dragon Tattoo) and writer Ben Ripley update the Joel Schumacher/Peter Filardi-written original with enough superficial supernatural style, bells and whistles for it keep modern audiences watching.  The main cast’s faces are familiar, the mood-lighting effective and enough ‘boo’ moments rear their heads to entice. Ethereal veils may be lifted in satisfying-enough style, but no practical boundaries are pushed.

Ellen Page (Hard Candy, X-Men), Nina Dobrev (The Vampire Diaries) and Rogue One‘s Diego Luna provide the main new young star-power and it’s on the shoulders of the cast  – again – that much of the film’s selling points eternally rest. They know the territory and have enough screen presence to lift things up – without them the result would likely be a much less competent SyFy movie-of-the-week vibe. All the characters are archetypes (overtly-ambitious, rich playboy, low self-esteemed trier and wise sage) and there are very few beats and responses you won’t see coming.  Original Flatliners star Kiefer Sutherland also cameos as a medical instructor, though there’s some confusion as to whether he’s the same character (Sutherland has said he perceives it as the same character, though the name’s different and there’s not the slightest indication of connective tissue for the casual viewer) and his presence feels like wasted stunt casting that probably took all of a day to film.

The 2017 version probably deserves a much better than the early single-figure approval ratings signposted on sites like ‘Rotten Tomatoes’ – as spooky thrillers go it’s perfectly  fine if undemanding fun. Both versions of Flatliners choose to put aside the rich vein of their central premise for the sake of something more transient and superficial and, ultimately, the diagnosis is once again more a case of disappointingly missed opportunities than anything life-threatening.

Flatliners is released on DVD in the US this week and will be released onto UK shelves in February. 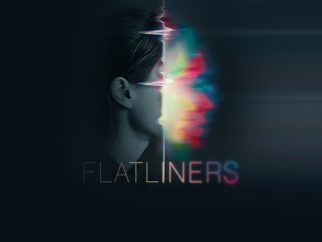