The events down in Whoville are a mixed bag of presents, pasts and futures...

The South Pole is a cold place to meet one’s fate, but two incarnations of the same Time Lord find themselves unexpectedly thrown together as they each ponder their lives and future.  But they are not the only ones there… a soldier who last remembers being on a battlefield in World War 1 appears from the wasteland desperately in search of… a Doctor.

He is being pursued by a being that appears to be made of glass, part of a race that have had their mission sidetracked by a time anomaly and they are seeking to rectify that mistake. But there could be dramatic consequences should they do so.

To save themselves and set things right that once went wrong, two versions of The Doctor will have to put aside their differences and work together. And if they need some familiar faces to help guide them, so be it…

We last saw Capaldi being blasted by Cybermen and staggering out into the North Pole snow to meet his maker. However there’s little outer fragility to his final hour. For a man crawling to his fate at the end of the last run, this is a character with somewhat superficial melancholy – a more somber tone taking a firm back-seat to cracking jokes, swinging on chains and running around adventuring as is his wont. There’s a line that explains both his and the First Doctor’s vigour, the power of imminent regeneration, but like so many tales in recent years, Steven Moffat’s final story seeks to homage the mythology of the show without really wanting to pay attention more recent events.

There’s a lot to like here – especially for long-term fans. It’s a love letter across the generations of the show but one that acts like a showcase and barometer rather than a complete story. The problem  is that the episode feels very much like opposing ideas stuck together – each pulling in slightly different directions and with contradictory remits and tone that go beyond the quite different personas of the Doctor himself. Moffat can be a strong writer but he’s more of a ‘high-concept’ guy, his episodes often feeling more like expanded pitches or taglines than fully-formed, all-explained plots… and this special feels like an epilogue not a climax.  (Moffat’s original plan was to leave after the main season and that fact hangs like mistletoe above the nostalgic fireplace. Had the Doctor lain on the cyber-battlefield musing about whether he wanted to go on or not, it may not have played to the ‘lighter’ side of things, but it might have felt more urgent and emotional. Here’s it’s a foregone conclusion stuck on to a intermission with a nostalgic hook).

Bradley played William Hartnell playing the Doctor in the Fiftieth Anniversary special ‘An Adventure in Space and Time‘ so he was an obvious choice to play the first Doctor given the original actor’s passing. It’s not an impersonation but close enough to be an interpretation that won’t divide the fanbase too much.  Moffat decides to underline their distinctions, Capaldi’s Doctor being horrified at the First Doctor’s casual sexism as much as ‘1’ is mystified by ’13’s attachment to all things sonic. It’s mostly played for laughs and punchlines with some hitting the mark and others missing.

Capaldi is clearly an actor who loves the role, the fulfillment of a lifelong dream and he relishes every moment he gets to play the role. Frankly, he could be handed the telephone directory and make it feel urgent, passionate and outright Churchillian, but the final speech of his incarnation feels less organic than it should… it’s exactly that, a speech and one that has the theatrics of an actor caught in the footlights, playing to the front row as he leaves the actual physical stage, rather than just the metaphorical one… and with dialogue being written for the page of a ‘Doctor Who  Christmas Annual’ rather than designed to be spoken in the show. Despite script directions, Capaldi isn’t talking to himself or even the incoming new tenant of the Tardis: he’s blatantly enunciating a mission statement that is as obviously addressed to the viewing audience as Hartnell’s controversial fourth-wall-breaking ‘Happy Christmas’ to camera all those years ago.  Sure, absolutely…it’s great that only kids should ever know the Doctor’s true name, but it’s a spoken message so overt, over-sold and overladen with in-your-face candy cane that though it might just work in a normal generic Christmas episode where there’d actually been children, it feels out of place in the climactic regeneration dynamic that’s just stepped off a war-zone. Compare it Capaldi’s chilling the anti-war speech in The Zygon Inversion – truly one of the highlights of the half-century-plus run of the show – and this soliloquy feels earnest but almost pantomime by comparison.

Gatiss is a divisive writer and actor. Often paired with Moffat (on productions that also include Sherlock and their upcoming riff on Dracula) he’s a talented scribe but his acting performances often lean heavily towards the exaggerated or the deliberate grotesque. So it’s a nice surprise to see him in understated mode here. Arguably his bewildered First World War soldier is the most grounded of the entire ensemble – never trying to be clever nor smarmy but quietly brave and resolute as the fantastical spins around him. The already-released clip of The Doctor mentioning the First World War and the Captain’s noting with horror the use of the word ‘First’ remains an emotional pivot.

Pearl Mackie’s return was a later decision after earlier versions of the script and she’s as good as ever, one of the modern era’s under appreciated companions, but in a role that’s harder to define here than ever. She walks that line well and the story is better for her being able to give the Doctor a few kicks to set him on the right track. Other cameos have been mentioned, but let’s not spoil them here.

There are echoes of Quantum Leap‘s final entry – the choice of an abstract story at a tangent to the usual set-up, a musing on one’s fate, role and right to find a certain lasting peace rather than trying to leap from time to time, putting right what might have gone wrong without you. But though there are moments of genuine pathos (and it would take a Grinch to bemoan too many of the niggles), it doesn’t quite have the same consistent emotional resonance it needs. It’s a tale of emotional turmoil told with a large degree of snowy fluff and the two disparate elements (jokes about glass nipples and invisible hair just seem a little out of place on Armistice Day) never quite mesh to become anything as epic as one might hope for, though as Christmas Day family fun it’s fine.

As Capaldi exits, attack eyebrows still on stunning, Whittaker makes the briefest of appearances in the closing seconds, marking a new beginning for the show as she enters and exits the Tardis is memorable fashion. Good luck to her… I think she’s been worth waiting for.

Moffat’s run was significant and controversial, well-deserving of both the brickbats and bouquets it regularly received as he played mix-and-match with an effective but limited toy box of concepts.  But going forward, Doctor Who has a new show-runner and star to steer by.

And, for better or worse… it’s probably about time. 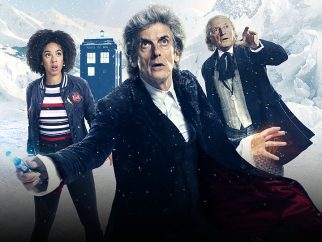