In an alternative 2017 the modern world has many of our tried and tested problems – but with a twist. Over the last millennia, the magic world of Orcs, faeries, trolls and elves has become part of the social strata. Elves tend to be the high-flying successes at business, the Orcs have never been forgiven for their ancestors siding with a legendary Dark Lord, faeries fly around like toxic hummingbirds and the human race lies somewhere in the middle.

Nick Jakoby (Joel Edgerton) is the first orc to be accepted into the LAPD, but it’s been a rough ride… with serious alienation from both his fellow orcs and certain police-officers. It hasn’t been helped by suspicions of divided loyalties when an orc gunned down his partner Daryl Ward (Will Smith) and somehow managed to get away. Ward survived and is returning to the beat – torn between loyalty to partner and the feeling that Jakoby isn’t telling him the full story.

However when a fugitive elf, Tikka (Lucy Fry) her pursuer Leilah (Noomi Rapace) and a legendary ‘wand’ turns up in the heart of gangland LA, they bring a lot of agendas hubbling and bubbling to the surface causing no end of toil and trouble. Such an object has the power to kill the person who wields it or grant them any wish and there’s no shortage of people willing to take the risk. Such people are loathe to let two cops stand in their way – which leaves Ward and Jackoby in the middle of a controversial prophecy and serious mortal peril…

There has been some rather venomous early reviews of Bright and though there are many fair criticisms to be laid at its feet, none of them seem quite worth the online passion against it – it’s biggest crimes are simply mixed tone and missed opportunity.  Much of the consternation has come from the fact that the film is penned by Max Landis, a magnet for controversy whether it be strong opinions about other film franchises or more recent allegations of both harrassing women online and actual sexual assault. But separating the film from its scribe and judging the fantasy romp on its own merits, Bright has all the ingredients but not quite the right mix.

David Ayer knows some of the territory here – he’s the director behind the likes of End Of Watch and Suicide Squad (and who wrote Training Day) and therefore it would seem he’d be the surefire guy to get the two tonal elements set right. But it never quite settles into anything other than a genre-collision which doesn’t serve or protect either aspect.

On one level, Bright desperately wants to be Alien Nation (the edgy 1988 film about the cultural assimilation of actual extraterrestrial alien refugees into Earth’s population, including the first active alien police officer) starring Mandy Pantinkin and James Caan – rather than the journeyman Gary Graham series that followed. But despite early promise it can’t quite bring it itself to explore the same social commentary other than in the most obvious ways. It pays lip-service to bigotry and racial stereotypes as background noise and set-pieces and then suddenly realises it has Will Smith as its star and detours back into the safer territory of wise-cracking buddy-movie that’s one-size-fits-all.

Smith knows his strengths and plays to them, though its the unrecognisable Edgerton that steals any acting honours from behind his prosthetics.  Fry’s elven-ingenue Tikka is paper-thin in execution, nearly mute for most of the first two-thirds of the movie  – a magic maguffin to protect rather than a fully-formed part of the story. Her pursuer, the normally capable Noomi Rapace fares little better, essentially being a poseable action figure bad-guy with a handful of lines but a better line in stunt-doubles.

There’s a fair amount of violence and swearing (the latter appearing every time the film feels a need to remind the audience that it’s being edgy) but it’s all a bit hit and miss with a plot that  doesn’t quite know how to fulfil its potential. As a self-contained Netflix movie, Bright may not shine like a Christmas star, but it’s better than many early previews suggested – a standard mainstream action-fest with solid production values. Ironically, it feels more like a perfectly acceptable and massively-budgeted pilot for what could have been an excellent mini-series with potential for a wider scope to explore the issues.

‘Bright‘ is now streaming on Netflix. 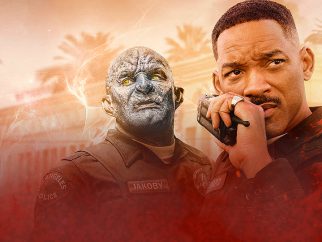