The Sound you hear is one hand clapping and the other one stifling a yawn over this trick-or-trope mess of a 'horror' film...

Kelly Johansen (Rose McGowan) is a blogger who specialises in debunking the supernatural. As tech-smart as she is snarky, she uses  sophisticated audio  technology to spot possible causes and then relaying her findings to her grateful audience. Receiving an anonymous heads-up about a haunted subway station in Toronto, she jumps on a plane and heads across the city and into its depths.

But within those tunnels she encounters various figures and experiences a sense of unease that she can’t simply put down to the ‘normal’ vibrations beyond human-hearing. As the minutes and hours tick by, can Kelly trust her senses or is the closed-down track – built over an old gravesite – about to give up more than she has bargained for?

The Sound, a film so devoid of originality that it can’t even muster enough enthusiasm for a decent title, feels like the kind of project made as a tax write-off or contractual footnote, somehow snaring a couple of notable names with an attractive pay-cheque (though in the case of McGowan one can only only hope she wasn’t paid by the word). Huge swathes of time go by with her silently wandering through several feet of dark, constantly being set-redecorated to simulate a longer subway tunnel with her  looking dazed and confused and tapping away  juvenile hashtags on her touchscreen (perhaps she’s wondering how she has such excellent cell-phone reception in the Stygian depths?).

Somewhere in this mess there’s a kernel of a good idea: that many supernatural occurrences could be created not by the otherworldly but by hyper-natural conditions beyond normal human perception. McGowan’s character’s comments about low-frequency noise causing hallucinations, sense of unease and actually capturing resonant echoes are delivered with just enough casual technobabble that you’d be willing to entertain it as the backbone of a story, but there’s no real plot to put meat on the bones. Kelly talks like a seasoned professional, posts like a teenager and walks around like an advert of Xanax.  The Sound throws one trite and contradictory idea after another at the screen, unashamedly ticking off a list of genre staples such as moving shadows, psuedo-voyueristic camera angles, past traumas, re-purposed gravesites, a sinister looking doll, spectral figures and unreliable flashlights that would make Mulder and Scully weep. But none of it sticks together with any sense of urgency or logic.

For a film with so few characters, half the ones that are there serve very little purpose. Hemlock Grove‘s Richard Gunn (real-life husband of the film’s writer/director Jenna Mattison) appears as Kelly’s boyfriend Ethan who sets off in pursuit when it’s apparent she’s in danger but his role is largely so superfluous to the main thread that a majority of his scenes are distant and unnecessary to the extent most could have been filmed months and miles apart from McGowan’s and still exorcised with no loss except to running time. Christopher Lloyd appears from the darkness looking enigmatic and uttering profound statements but he’s little more than a Scooby Doo janitor made flesh. Wynonna Earp‘s Michael Eklund slithers on to screen as a dubious cop drawn in to Kelly’s subterranean shenanigans but even though we’re clearly meant to distrust him, his presence and reasoning remain somewhat baffling throughout.

It’s one thing to have minor niggles with any movie and its suspension of disbelief – particularly in the horror genre –  but here such inferior elements mount up by the minute. Early on, Kelly jumps on a plane from Detroit to Toronto, promising to be back that night for a party – a trip which would be largely be geographically unlikely in the time-frame even without her bouts of unconsciousness. (Adding insult to injury, Ethan’s pursuit takes place hours later with the selfsame lack of realistic commuting).  Through story-necessity rather than logic, Kelly gains access to the lower levels of the underground stations with unfathomable ease, merely going through an unlocked door marked ‘private’ without setting off an alarm or even raised eyebrow. When the ‘plot’ calls for it she falls into deep sleeps only to awaken and start texting again.

When the climax – and ‘explanation’ comes it’s likely that you’ll either be dissatisfied or be beyond caring – a ninety minute film that feels twice as long.

Mattison’s debut as a director shows she’s a fan of the genre and knows how to place a camera for good effect, but given she’s filming from her own script, it’s fairweather praise at best. The Sound‘s only real saving grace is that it signposts what can be done on a meager budget and a ‘bottle’ set. But to anyone wanting something other than handwavery cliches, The Sound you will likely hear will be the tv remote giving up the ghost. 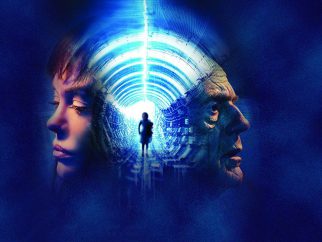