Imagine if Tarantino directed 'Drop Dead Fred '- and you're about halfway to the dropping-acid-reflux craziness of SyFy's 'Happy!'

Nick Sax (Christopher Meloni) was once a decorated cop but those days are long gone, brought down in an avalanche of missed chances, vices and dovetailing into a spiral of self-destruction. Now he’s a hitman for hire with the death-wish-whispering voice in his head not truly caring whether he survives each assignment or not.

In the midst of a gangland drug war of which he knows little and cares less, he’s hired to kill a group of young pretenders to the throne, but the dying words of one of them are about to cause no end of trouble: it’s the password to all the mob information and filthy lucre and half of the crooks in new York, nevermind several corrupt officers want it. If there’s one man guaranteed to screw it up, it’s Nick but he has more immediate concerns including a possible heart-attack and a lack of illicit drugs to deal with it.

If THAT wasn’t enough, on return to consciousness he finds himself confronted by a wise-cracking animated blue unicorn named Happy… a creature who says Nick is the only hope to save a kidnapped child. The last thing Nick needs is an imaginary friend, even someone else’s… but the two might need each other to survive the next few hours…

More a case of dropping acid than Drop Dead Fred, this latest offering from SyFy is a surreal experience, positively reveling in absurdity, violence, profanity and silliness. Those factors are both its triumph and Acchiles hoof.

Happy! is an uneven mix of everything, a trifle of testosterone proportions. There’s certainly something to applaud in the original idea by Grant Morrison and the attraction of converting his comic to the screen, but the visual collision of elements that worked so well on the original printed comics pages is a whirlwind that’s both toxic and kinetic in equal measure. When Torchwood was spun off from Doctor Who there was a glee in being controversial, but it became rapidly clear that using bad language and violence was not enough in itself to be edgy. Happy! has a similar obstacle to overcome – having a (literally) killer concept isn’t enough if you just mash together polar opposites and watch the chaos ensue – it requires just a little more texture and effort. The pacing here is so fast and surreal that it’s impossible to fully get a firm footing and it means that the result is something you experience rather than enjoy – being dragged along behind without a designated driver. If it’s not a mixed metaphor then it’s that all-encompassing embrace of chaos that could have done with keeping the reins intact.

Christopher Meloni takes every opportunity to eat the scenery, a law and disorderly conduct stance that largely requires him to shoot, swear and look like he’s barely able to stay conscious. His track record as tv tough guys helps Meloni and the production sell the high-concept idea of street level dirt meeting pixelated shine in the same way that you might be able to forego exposition if you dropped Bruce Willis into Who Framed Roger Rabbit?

Patton Oswalt provides the voice for Happy, a nice wry piece of casting with the often under-appreciated comedian and actor being able to rely on fast-talking without having the prat-falls to leave bruises.

The first episode whizzes along, skidding and sliding and catapulting itself from one absurdity to another. It’s easy to see the attraction of the ‘hook’ and original pitch, but if the show is going to keep going it’ll need something more than being crude and crazy. So far it has a fast pulse and hair-raising momentum, but it will also need the kind of innate heart and subversive sentimentality for which injection of adrenaline is no substitute.

Happy! is currently broadcast each Wednesday on SyFy in the US. No UK date has been announced. 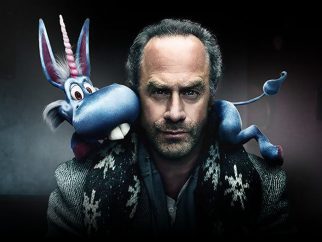