Netflix and Marvel's latest isn't always easy to watch, but it's a diamond in the rough...

Frank Castle feels he has completed ‘dealing’ with the people responsible for the death of his family and has ‘retired’ to try and leave a so-called normal life. However the ghosts of the past, real or imagined,  won’t leave him alone –  and he’s about to find out that the conspiracy goes a lot deeper and that some of his own actions in the Middle East may have been linked to their deaths.  Were the ‘black-op’ missions he was involved with the source of people who wanted to silence him… and if so, were the deaths of his wife and child somehow his fault?

The world believes Frank is dead… but as the FBI and the press begin to circle, how long will Frank Castle’s ‘death’ stay intact… and with a new mission and purpose, can the man they call The Punisher really rely on the authorities or even his friends? It’s time to lock and load and heaven help anyone who gets in his way…

If Marvel and Netflix’s Jessica Jones felt like it was the first superhero outing to deal with PTSD, then The Punisher, the partnership’s latest production, takes it to a whole new level. Jessica’s trials and tribulations were the result of what amounted to mutant domestic abuse, but The Punisher is a series rooted in the post-battlefield version of the disorder and it doesn’t shy away from the damage that soldiers face when they return from the battlefield.

Jon Bernthal made a major impact as the duplicitous but pragmatic Shane in early seasons of The Walking Dead and has gone on to appear in several feature films such as Sicario, Wind River and Baby Driver. Though he might have initially wondered if a comics-based property would be a good fit, the role of Frank Castle is one that fits entirely in his wheelhouse – a character of thuggish proportions and ‘enforcer’ inclinations but a furrowed brow combining frustration and confusion. Once again he portrays an intimidating but damaged individual struggling to make sense of the tectonic changes in his life and making a series of questionable choices that are dramatic – ill-advised but sometimes understandable. The Punisher doesn’t preach and emote… it prowls and howls like a wounded animal. There’s a moment about five episodes in when you realise Bernthal’s Castle has smiled for the first time and it’s positively jarring.

There’s an argument to be made when we reach the halfway point that this solo outing could have been served better by a shorter run (this first season runs to thirteen episodes) but the over-all series turns out to be better paced than one might initially believe, getting its cast to evolve and develop, feeding in to the main thrust of the stories and certainly getting its second-wind, deftly dovetailing many of its elements into a satisfying climax.

The show launched in a climate weary of real-life violence which might explain the lack of expected promotional material in relation to previous Netflix / Marvel projects. The show was always going to have to address the shell-shocked elephant in the room – Frank Castle is without doubt the most off-the-reservation and divisive character the partnership has given us so far. There’s certainly an early worry that the nihilistic tone of the show could sit heavy on the shoulders – there’s an innate brutality that permeates every single moment. Daredevil pushed a little at the boundaries – giving us a down-and-dirty style of fighting rather than the pixelated confrontations of Marvel’s big-screen films. The Punisher says ‘Hold my beer…’ and raises the bar while simultaneously using it to break bones. The last couple of episodes risk embracing that blood-splattered, teeth-splintering dark side a little to passionately and relentlessly, giving shows like the late great Banshee a serious run for their money and the result is not for the squeamish. Even if one doesn’t have a problem with the viewing of the violence itself, there IS the pragmatic question of how much physical damage a non-mutant superhero like Frank Castle can stand…. he’s currently had more bullets flying through him than Central America. Less might have indeed been more, leaving something to the imagination.

The Punisher endeavours to walk a careful line with its vigilante status. Though fully-fueled by testosterone, some of it is likely to play well with actual vets, seeking to match a heightened dramatic story with some knowing elements of what it’s like to feel adrift in a world for which you’ve sacrificed so much but ended up with less. It’s a series that showcases bad and fateful choices but gives texture to the reasons they happen. Offering various counterpoints, it neither fully condemns nor condones Frank’s actions – showing a range of characters in the show’s ensemble that cope with returning to ‘civilian’ life in different ways. When a young man Lewis Walcott (11.22.63‘s Daniel Webber latches on to right-wing rhetoric and tries to emulate what he perceives to be Frank’s mission against a country that’s forgotten him, it’s played out as a tragedy with Walcott’s character having some justifiable grievances amongst the paranoia and propaganda. Ironically it’s both Castle and Karen Page (a very effective guest turn from Deborah Ann Woll on loan from Daredevil) that give voice to the real differences between Lewis – that life can often be unfair and brutal but that’s a reason to react not a simple catch-all excuse in how one does so. Frank does what he feels is necessary and fulfilling a justice undelivered by the courts and authorities, but he doesn’t take any such moment lightly. He’ll kill without flinching, but he’d also take a bullet for an innocent, never mind the few people that he might consider true friends.

The Punisher could have been a car-crash – either nasty and sensational for the hell of it or watered down and safe. There are moments when it uncomfortable viewing – particularly in the current climate of real-life violence and bloodshed –  and  risks heading to through those boundaries, but to a large extent the series works far better than one might have expected. 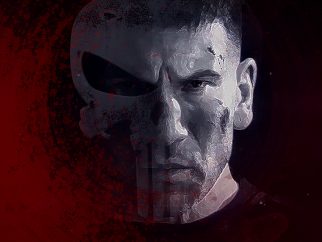