Marvel's street-level heroes collide as the various Netflix series dovetail into 'The Defenders' and a much-anticipated team-up...

Danny Rand (Finn Jones) and Colleen Wing’s (Jessica Henwick) efforts to track down members of ‘The Hand’ in the Far East prove unsuccessful when their quarry is killed by an assassin. His dying breath warns them that the occult group has some serious plans for New York.

Back in the US, Jessica Jones (Krysten Ritter) is hired to find an architect and quickly finds out his disappearance may have sinister overtones; blind lawyer Matt Murdock (Charlie Cox) works his way through more underdog cases and is hired to represent Jessica when she (inevitably) gets into trouble and Luke Cage (Mike Colter), fresh out of prison, looks into why young men are disappearing from the streets after being promised massive pay-days, only to end up dead. All these roads lead to an office-block in the big city that houses many secrets and a fateful collision of reluctant heroes.

It is owned by the mysterious Alexandra (Sigourney Weaver), given mere weeks to live by her physicians… and who will stop at nothing to acquire enough power to survive. To do that she is taking steps to defeat death itself… and if New York needs to be laid waste in the process, it’s a price she’s willing to pay.

The Defenders is the street-level answer to The Avengers… while Marvel‘s premier super team saves the life, universe and everything in the skies above, these Netflix characters are the ones who are struggling to pay the bills and walk a very indistinct line between right and wrong. That doesn’t make it any less interesting – arguably more so. Drama almost always works best with broken pieces rather than just a shiny whole.

Each of the previous shows (Daredevil, Jessica Jones, Iron Fist, Luke Cage) has something of their own visual cues – from their eye-catching opening credits to their style of cinematography and that distinction carries through here making use of vibrant colour schemes. The credits twist the characters together and that’s done more slowly on a narrative level as the episodes play out.

Anyone looking for an immediate super-hero team-up from the get-go will have to bide their time as the first episode largely sets out the characters within their own orbits, allowing those who haven’t watched the various other Marvel / Netflix shows (or are behind with any of them) to get a general idea of who everyone is and their place in the world. That world, apart from the earliest scenes, is largely in and around the Hell’s Kitchen area of New York City. This sets up the idea of the shared universe and, indeed, makes you wonder why these people haven’t actively tripped over each other already.  For a weekly show that might seem stretched out, but as you’re likely to be binge-watching The Defenders, it’s much easier and streamlined and believable. So, on that level, the pacing works… each of them feeling as if they are guesting on the fringes of each other’s stories before they end up on the same screen. By the end of the second episode the threads are pulling in tighter and more satisfyingly – though it’s the end of the third chapter before everyone ends up in the same room.

The balance of characters works better than you’d think, each of our main cast having lives you can invest in – the characters may be on a collision course, but they don’t know that… so for them it’s just business as usual. The banter when they do finally meet walks that fine line between well-executed snark (particularly from Jessica Jones), general skepticism on the mystical side of things (try explaining immortal, ancient cults to someone whose main experience is dealing with gangsters) and the way that the collaboration of powers and abilities works despite none of them being actually invested in the team-aspect of what’s to come.

It might be too spoilery to discuss certain guest-stars (ones we might expect to see  cameo in their connective tissue roles) while others’ presence is more of a surprise unless – you’ve seen the trailer from San Diego – but welcome and a pay-off for long-term comic continuity fans). However Sigourney Weaver makes a well-publicised antagonist to unite against. Alexandra’s motivations remain a mystery for some time, but she has such a presence that she manages to give her character an icy clarity and quiet danger that is immediately dangerous and threatening without giving any early specifics to why. She’s definitely older than she initially lets on and that longevity gives her a unique perspective and patience.

There’s plenty of action to keep fans satiated. The on-screen martial-arts of  Finn Jones’ Immortal Iron Fist have improved since the early days of his solo series but Henwick’s Colleen still gives him a run for his money. The differing fighting techniques on show work better together than expected with complementary choreography: Jones and Cage providing the muscle and Rand and Murdock providing the more stylised moves. None of these people are in superhero costumes and that is another aspect that makes the style and momentum more in-your-face.

Critics were allowed to see the first half  of the season and on the strength of the available chapters, The Defenders it was an organic, down and dirty series that fans have been waiting for. Having now watched all the eight episodes, the only quibble is that the final episode feels a little anti-climactic in its pacing and the green-screen fx suddenly take a demonstrable turn for the worse – but the series has a whole is very much worth it.

It’s not perfect but it’s exactly what you’d expect and, for once, that’s an entirely good deal…

The entire season of ‘The Defenders’ is available on Netflix from 18th August. 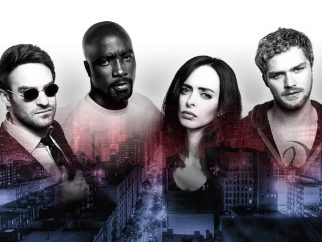 To be or not Obi? Next Star Wars to feature Kenobi?