The USA Network's new mini-series is brutal but compelling...

“It’s the sign of an eco-system out of balance…’ muses detective Harry Ambrose as he notes dying trees on the far side of a woodland beach that has become an horrific crime-scene. It’s a statement rich with subtext for the eight-part mini-series to come.

Cora Tannetti (Jessica Biel) might seem like she has the perfect life, though if you looked a little closer you’d see she’s not as happy as she outwardly appears. She tolerates an overbearing mother-in-law and though she loves her husband, her needs aren’t the same as his.

On a visit to a nearby beach-head and party she goes for a swim and almost loses herself in the deeper waters offshore. On her return she sees a young couple heavy-petting a few feet away just as a rock tune booms out of their radio. She gets up from cutting away the pear she was eating, walks across and stabs one of the revellers in the neck and torso, killing him as blood pours everywhere.

Within minutes she is restrained and taken into custody, but though it’s a slam-dunk case for the local police-force, Detective Ambrose (Bill Pullman) , troubled by relationship issues of his own, becomes more and more driven to find out what initiated the tragedy. Did the victim know his attacker and why don’t the memories Cora claims as possible reasons for her actions, ring true? As Cora’s family splinters under the strain, it quickly becomes clear that this is merely the climax of an even more tragic backstory…

The Sinner is that peculiar entry in crime-time mini-series… not the whodunnit but the whydunnit. There’s absolutely no doubt about the fact that Biel’s Cora committed the sudden, brutal attack on another beach-goer, an act that took place in front of countless witnesses – including friends and family – and for which she herself accepts culpability. But from the first moments of the episode that set out the supposed calm before the storm, there’s a bubbling undercurrent that weaves its way through the otherwise superficially becalmed suburbia that might as well glow in red neon and shriek ‘dark secrets revealed here!’

Based on the 2008 novel by Petra Hammesfahr, the mini-series is a character-study as much as a mystery. In it’s search for a larger  truth, it’s essentially watching a car-crash in reverse, stretching out your neck to see what led up to a scene of devastation from which you can’t quite look away.

A little like Charlize Thereon’s Oscar-winning turn in Monster, the series casts an actor known for more often playing attractive roles and gives them more mundane surroundings and ‘look’ to tackle. But Biel has the chops to deliver and for much of the first episode at least, the acting comes not so much from dialogue but the kind of performance that has much of the effort going on behind the eyes. Cora is, metaphorically and literally, treading water at times, gazing off into something that she (and we) can’t quite quantify: is it pain,regret, anger, shame or a mixture of them all? It’s not clear from the first chapter – and not much quantified in the second – about how much Cora knows or believes for herself, only that at least some of the things she tells Ambrose quickly turn out not to be true.

Pullman’s Ambrose is a crumpled figure fighting his own demons, which is perhaps why he finds himself drawn in to solve the problems of another. Like Cora, it’s not clear early on whether we’re supposed to feel sympathy or pity for his character, one who seeks relief in the arms (and other limbs) of a local dominatrix rather than his estranged wife. Pullman has cornered a niche of troubled world-weary souls, furrowing his brow at the way events are buffering his characters… sometimes they rise to the occasion (such as Independence Day and its seminal Presidential speech to the masses) sometimes less so.

Some tabloids have pointed out the sexual content, but such opportunistic somewhat misses the mark given that its the scenes are intense rather than them being explicit – camera-angles hiding just enough of the flesh on show.

A self-contained story that won’t run beyond its allocated eight-episodes, we hopefully won’t run the risk of the network wanting to have a sequel or leave elements to be resolved later. On the strength of its first two-episodes, that should be about the right length to keep us watching, invested in the truth without growing weary of the mystery.

The Sinner is being shown on the USA Network on Wednesdays. 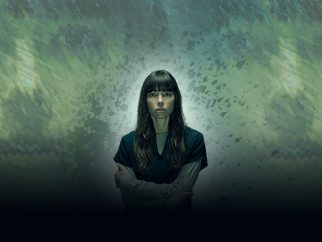