The casting of Jodie Whittaker as 'The Doctor' caused cosmic controversy. With enough hypocrisy to go around, perhaps we should just wait and see how she does, suggests John Mosby... 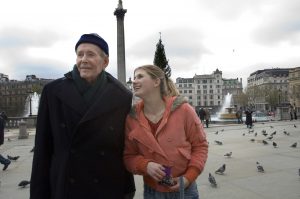 Years ago I watched the film Venus in which a young Jodie Whittaker holds her own against the likes of Peter O’Toole and Leslie Philips. If you’d shown a cast-list from the film at the time and asked a random person which actor was most likely to take residency in the Tardis… Whittaker might well have been last on the list somewhere after the caterers.

But whisk forward to mid-July 2017, minutes after the Wimbledon Men’s Finals (irony, much?), Jodie Whittaker was announced as the new incarnation of the famous time-traveller.

There are those who compare the very idea of casting of a woman in the Doctor Who role to having a gender-swap for the James Bond franchise or making Sherlock Holmes a woman. That doesn’t make a lot of sense. Bond is a franchise without lengthy continuity, each successive actor essentially starting again or selectively shifting all but a few key touchstones. But it doesn’t exist  in a world where an ongoing character can gender-swap at will. (That being said, current film release Atomic Blonde is being marketed in the ‘female James Bond’ vein and one could also point to the success of Elementary where Watson is a woman played by Lucy Liu, but that’s ground-up reinvention).

In a continuity where the Doctor, a Gallifreyan, can physically change his entire molecular structure to alter the face, eyes, ears, nose, height, weight and hair, it’s wasn’t a huge leap to suppose that goes as far as gender. Though that extrapolation has only formally been mentioned on screen in the ‘Nu-Who’ era, post-2005, it’s a logic already entirely consistent with the mythology as it existed in the previous decades. As far back as the 1980s, ‘Fourth’ Doctor Tom Baker had made sly references to the possibility of a woman replacing him and original Doctor Who instigator Sydney Newman, when formally  asked about how to revitalise the series (towards the end of the Colin Baker era) seriously suggested a female regeneration to the eternally reluctant Michael Grade. Key episodes from modern Who explicitly underlined the gender notion with mentions of the Time Lord named Corsair having been a woman first, the character of The General changing sex on-screen (from Ken Bones to T’nia Miller) during regeneration and the character of The Master becoming Missy. So on a pragmatic, internal-logic level the Doctor can be a woman – there’s no coherent argument to be made otherwise. 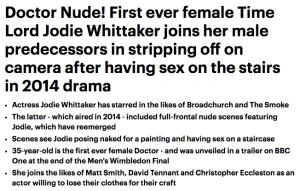 Certain tabloids were predictably low-brow as the news broke. It’s hard to remember the photo-spreads of a topless-for- his-art David Tennant but the reliably hypocritical Mail-Online prioritised such ‘credentials’ for Whittaker with a ‘Doctor Nude‘ headline and a list of her sex scenes to date. The Express wondered if the BBC picking a woman was simply the Beeb being ‘too-PC’  and The Sun‘s neanderthal Adam Postans scrawled that “It is frankly nauseating that the [BBC] should now get on their sci-fi high horse and gallop into Right-Onsville to plonk a woman sheriff in town.” Apparently the periodicals neglected any research which would highlight that the show was originally steered back in 1963 by one of the few women in the business at the time, the ground-breaking Verity Lambert, with the director Waris Hussein being a gay Asian man.

But as controversy and comment swirled in the time vortex, the question moved from ‘could?’ to the far more subjective ‘should?’.

Some wondered if this was stunt-casting. ‘Doctor Who is a woman!‘ would always get more column-inches than any male actor being chosen. It’s not wholly unreasonable to be cautious of such marketing tricks:  modern media often seeks to actively engage controversy or launch on a specific ‘hook’, sometimes as a detriment to the actual qualities therein. Director Paul Feig faced similar observations when he helmed an all-female Ghostbusters reboot. The truth was the final result – judged entirely on its own merits -was a lot of fun, but it’s equally accurate that the film’s early marketing did itself no service by singularly promoting that gender-swap element as its main hook while simultaneously whinging it was being judged on that. There’s that very, very fine line that is ‘Being a man or woman isn’t important, it’s what they bring to the role that’s important, dammit!‘ with the ‘Being a woman at last sends an important message!‘ It’s tricky to have a stance that claims something be very, very  important and very, very unimportant simultaneously.

Yes, the character of ‘The Doctor’has always been male in appearance – an argument that seems to play as a lightning rod to both camps… the ones that say tradition is a potent yardstick for a reason and the others that swear that only deliberately weighting the die in the opposite direction can excuse the lack of diversity thus far.  But even the most broad(church)-minded fans doubted that incoming show-runner Chris Chibnall would make the gender-swapping leap in his first foray. Many pundits thought it was something that might happen whenever the new actor left and Chibnall had his feet further under the table.

But if you can criticise the mainstream media and die-hard fans (and both are more than capable of tilting for and against the loudest voice in the room) for being stubborn and opinionated and sexist, then one shouldn’t let those closer to the actual production escape from view.

Chibnall has revealed that even before choosing Whittaker he was always going to cast a woman – thus ruling out any male actor, which is quite a broad brush of course-correction fluid. One can argue with conviction that women often get a lesser amount of exceptional roles and that it’s great to see more in lead performances. But being determined to only pick a woman over a man rather than the subtly different stance of being completely open to the idea of a female lead,  simply isn’t an example of true equality and parity – it’s merely tilting the angle to a different preference/prejudice you prefer.  Want to go further down that thematic minefield of opinions and hey, black actors are equally known for not getting the same opportunities… but no-one’s accusing Chibnall of being actively racist.

The outgoing Steven Moffat, one of the UK’s most talented screen-writers but no stranger to making definitive statements that often shift fundamentally whenever the mood takes him, arguably sonic’d himself in the foot during this year’s San Diego Comic Con. He consistently batted away that there was any criticism of Whittaker’s casting. Some of these comments went beyond merely defending the brand with blinkered interviews and into comments as snide and derogatory as those he was complaining about. “There has been NO backlash… except for one horrible spotty fat man typing away in his basement“. That will do little to endear him with even the most responsible corners of the  fanbase, some of whom have not been delighted with the casting decision but expressed themselves in perfectly reasonable words and methods and not with the venom or crude remarks admittedly found in some corners – which Moffat, ironically, is denying exist at all anyway.

Let’s be fair. You can think that Jodie Whittaker is wrong for the role and not be remotely sexist – there’s a wholesale Who tradition of saying you love the current version and will never love the next, until the wheel turns full circle. I think Whittaker’s a truly great actor, but I will fully admit I scoffed loudly at her initial inclusion in the bookies’ line-up as merely the latest in a line of weird bids including everyone Chibnall’s ever worked with. She didn’t seem to have that alienesque, outlier quality that’s particular to the Doctor and a through-line through the years. She’s not someone I’d have picked or even really considered in the running, despite her strengths.

But I ultimately have no problem with her being picked….nor with the notion of a woman in the role. Isn’t it actually amazingly wonderful to have the unique kind of role where you can imagine anyone from David Bradley to Hayley Atwell or Helen Mirren to … well, Jodie Whittaker for the self-same role… merely on the potential of what they could do with it and the innate (two) beating hearts at its core?

Doctor Who has always been about facing the amazing, the bizarre, the unlikely and the possible and doing so by flying in the face of expectations and trends. What better time to test those strengths in new and exciting ways?