It's been eighteen months since the controversial end of 'Castle', but Stana Katic's new tv thriller is much darker... 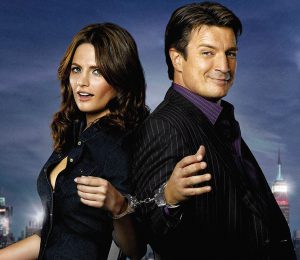 Though she’s appeared in the likes of JAG, 24 and Quantum of Solace  Stana Katic is probably best known for the role of Kate Beckett in hit ABC series Castle. The show, which ran for eight seasons  between 2009 and 2016, caused something of a stir in its final days by announcing that Katic’s female lead character – wife and partner of the show’s titular novelist-turned-crime-fighter  Rick Castle (played by Nathan Fillion) – would not be returning for the proposed ninth season. Rumours that the two stars didn’t get along seemed confirmed with the co-star’s muted response to the dropping of Katic and the fact that the next season was due to have a budget cut and other characters leaving.

Fans’ reactions were loud and negative and the news quickly became that the show was not returning and would be cancelled – the finale of the run having an oddly disconnected coda on the end that saved Katic’s character from an apparently not-quite-deadly gunshot wound and gave the couple  a kind of happy-ever-after with kids.

Since then Fillion has gone on to appear in Modern Family, work with Firefly cast-mate Alan Tudyk on Con Man and voice the character of Sterling in the Cars franchise. But Katic has been absent from our screens – until now. Katic is now headlining a new drama series called Absentia. She plays Emily Byrne a determined police detective hunting down an infamous serial killer in Boston. However during the investigation Byrne goes missing and Conrad Harlow, a reclusive and eerily calm wealthy banker (played by Richard Brake) is convicted of her presumed murder.

Six years pass, with Harlow in jail and Byrne’s husband Nick (Patrick Heusinger) remarrying… and then – shockingly – Emily is found in a remote cabin in the woods, barely alive and with no memory of what happened to her. Returning home she learns how her husband has moved on and her son doesn’t really remember her… but even worse, the serial-killings have begun again and some people now consider  her the prime suspect.  Some elements echo the story-line in Castle where Rick was abducted and went missing, though the execution and other story elements are unlikely to play out in a similar tone.

RT and tweet us your thoughts on the OFFICIAL #ABSENTIA TRAILER starring @Stana_Katic & @heusinger! ???? (English version, no subtitles) ???????????? pic.twitter.com/LeVGrRyPLF

The ten episode thriller was filmed in Bulgaria over the last year and there have been several television deals made to broadcast Absentia in various territories. It will air in Spain and Portugal on AXN, Poland on AXN PL (both part of the Sony Television Network and Showcase in Canada. A US broadcaster has been decided but not announced – with details expected to be forthcoming very shortly…