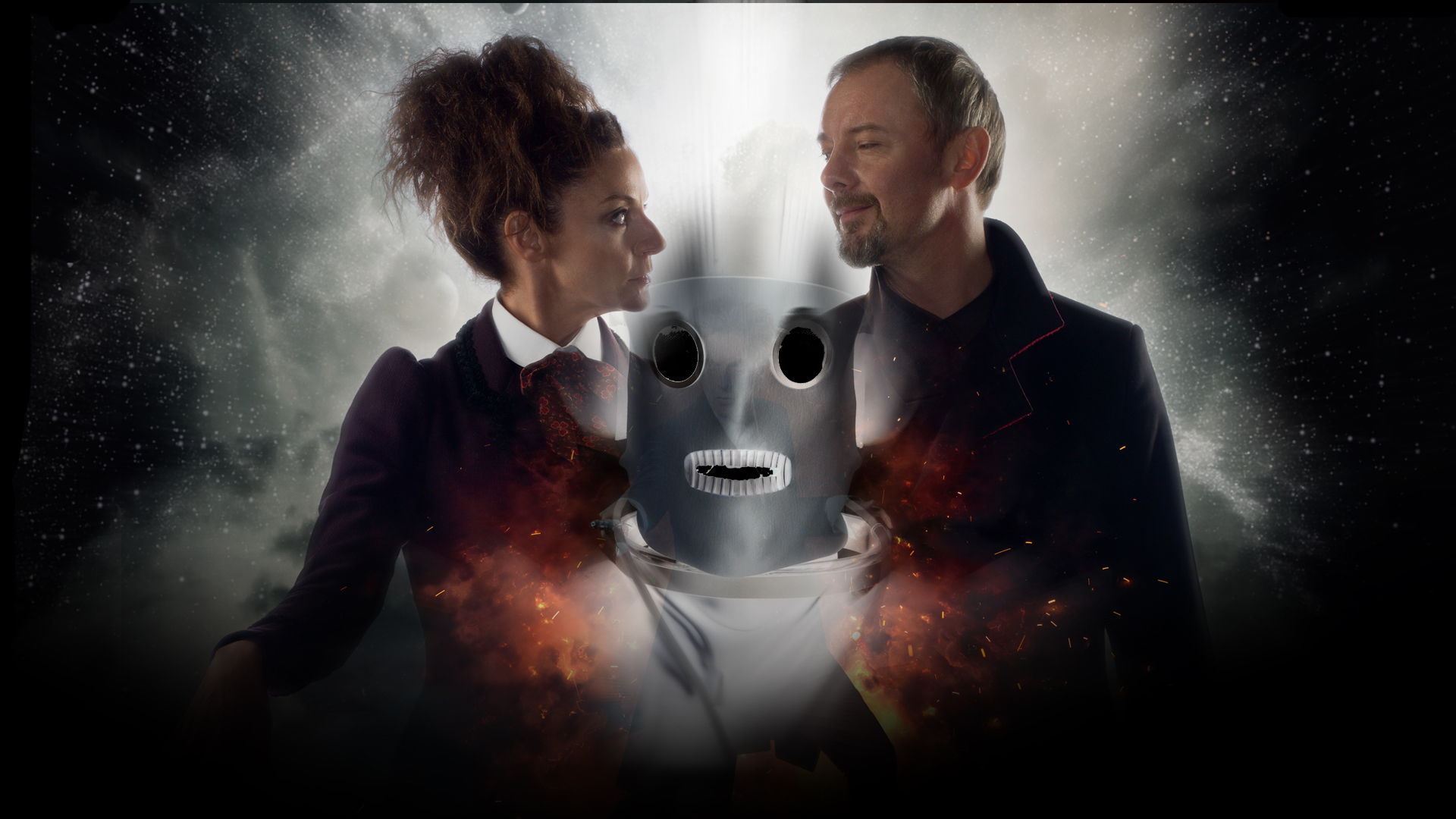 The only way for the Doctor to see if he can trust Missy is to give her a ‘field-test’ – setting her down in a compelling situation to see how she handles herself. To that end he’s recruited, somewhat reluctantly on their part, Bill and Nardole to accompany her while he watches from the Tardis.

And so the ‘awesome heroes’ arrive on a seemingly abandoned colony ship that is trying to pull itself away from a black hole. The ship is so large – hundreds of miles long with varied artificial environments – that the cosmic forces are making time run at different speeds at each end.

But what has started off as a scientific puzzle and a rescue mission is about to go horribly wrong. The Doctor has made a huge miscalculation from which he cannot talk his way out and for which another will pay the price. And as time itself becomes an enemy, a familiar threat is lurking in the wings to make matters worse and another is ready to be born again…

And so the end is almost nigh and with it comes a story with much weight on its shoulders, an episode that starts its mission statement of ‘end of days’ from the very first scene (with distinct echoes of Pertwee) and proceeds to jump backwards and forwards along its narrative to explain how we got there. Steve Moffat has played with ‘time’ like others play with train-sets (gleefully smashing engines together with increasing vigour and levels of fall-out)… so it’s interesting that this is a story about time working differently but where the ‘telling’ of it is an artistic choice rather than necessary to the plot. Moffat chooses to open with the scene he does to be deliberately provocative and the ‘time-dilation’ that happens later / earlier is an aspect of the plot rather than the story-structure.

If that sounds complicated, it’s – ironically – easier to understand by watching.

World Enough and Time is an episode, like the season entire, that will only be able to be fully judged in hindsight and when next week’s season finale plays out (and even then, some narrative shrapnel left over for Christmas). Much has been made about this installment in advance and, ironically, that may be its greatest problem. The marketing machine may have wanted to dangle a few cosmic carrots, but in doing so it’s spoilered what could have been truly epic reveals and surprises.

The BBC revealed a major guest-star / character return even before the show began its current run and quite why they felt the need to tip their hand in advance isn’t certain. Maybe a tabloid was threatening to spoil the fun and the Corporation decided to get it out ahead, but whatever the reason, there’s no doubt that some of the emotional wallop provided by that guest-star is diffused by the knowledge of their presence. It’s still possible that their ‘entrance’ will be a surprise in how it’s presented, but those even more familiar with online rumours have probably missed out on a genuinely great left-field ‘WTF?’ reveal.

Yes, John Simm, channeling a voice that somewhere between Fiddler on the Roof and Babylon 5’s Centauri, relishes playing the part of Razor. Just twinkling out from under layers of genuinely good prosthetics, it’s almost a shame to see that persona shaken off when the climax draws near. Those wanting answers as to exactly where Simm’s Master fits in to his own timeline don’t get definitive answers, though it would seem to be after his days as Harold Saxon (and nowadays, who’d want the role of PM anyway?). There’s some lore in place as to why multiple versions of the Doctor won’t remember interacting until the final chronological incarnation experiences the same events but here Simm recognises Missy as ‘himself’ and still indicates that he’s worried about his future.

World Enough and Time is essentially a haunted house story, one that receives occasional taps on the shoulder reminding it what time it’s all being broadcast but to which it merely gives annoying glances and still proceeds to go the spookiest route a Saturday evening will allow. We already know that we are witnessing a ship with old versions of the Cybermen (again, it would have been great to find this out alongside the Doctor, rather than months ago) and their hollowed out, mournful existence – in a medical purgatory – is truly unnerving. There’s a line in the episode that would have made a better title for next week’s season finale than the announced ‘The Doctor Falls’ and one almost hopes that there’s been a sleight of hand with the titles so that the better ‘Genesis of the Cybermen‘ moniker could still be used… we’ll see.

Moffat has a habit of placing beloved characters in definitive mortal peril, apparently signing their death-warrants as a finale dawns but then finding a split infinitive with which to partially-pardon them. River gets an electronic after-life, Amy and Rory are annexed in Manhattan for the rest of their days and Clara the Impossible Girl gets a Tardis and a death deferment right out of fan-fic heaven. Thus it’s always wise to take any shuffling off the mortal coil with a pinch of salt. That doesn’t make the significant demise (and worse) in this episode any less shocking, but it does make you want to postpone the wake until we see how it all plays out. (That being said, there’s an ill-judged almost cartoon aspect involved here that may have been there simply to cater for younger viewers). Will the production – knowing it’s the last hurrah – make the consequences stick or will heaven’s revolving door get one final spin for old time’s sake?  It’s hard to tell which one might prefer, but there’s an undeniable grim hue to the entire episode… largely caused by the Doctor’s overwhelming arrogance and reckless endangerment. That’s a trademark that’s permeated a lot of Capaldi’s run, providing both the high-points yet also some of the unevenness from week to week. How this season and chapter in the show’s history play out may well decide how forgiving the audience can be.

FX-wise, the story boasts some serious specific gravity. The scale of the starship stuck in the event horizon has echoes of Red Dwarf in its establishing shot and the black hole itself is unexpectedly vivid. One also wonders if Moffat was inspired by the likes of Snowpiercer, with its multi-generational ‘class-system’ acting as a springboard?

Transformers: The morning after ‘The Knight’ before…