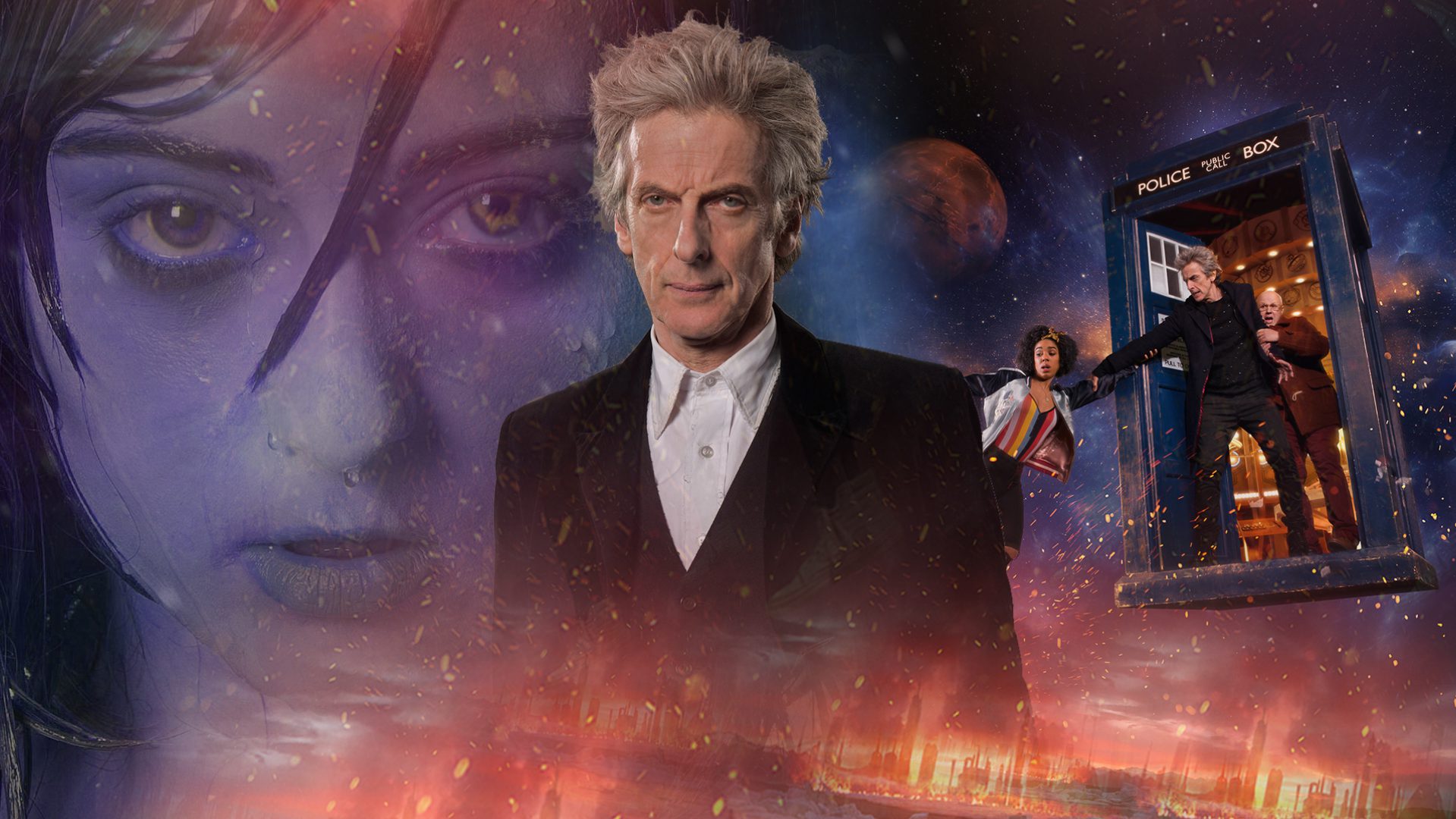 Bill Potts (Pearl Mackie) may make a modest income serving dinner at Bristol University but in between plates of fries and making eye-contact with other pretty girls, she quietly slips into the lectures provided by the man the students and faculty refer to as simply ‘The Doctor’ (Peter Capaldi). He’s a man who has, apparently been teaching there, on and off, for around fifty years, but no-one seems to be able to pinpoint his area of expertise… is it physics or poetry and is there any real difference?

He in turn has noticed her recent interest  and – despite reservations – wants to find out more about her hopes and aspirations. Over the course of a term he encourages her to pursue her studies with him as her personal tutor, encouraging her not to ‘waste his time’. But Bill has her own distractions. There’s a girl called Heather that Bill would like to get to know much better, but when she disappears and all that appears to be left is a puddle – and a puddle that doesn’t even have the politeness to act like any other self-respecting reflective surface – the Doctor senses a new mystery.

But is this strange occurrence linked to a personal secret the Doctor is keeping behind a locked door in the university basement or is this just another random alien incursion? The Doctor – his reconstructed assistant Nardole (Matt Lucas) and Bill will race from one side of the universe to another to find out the answers – if they can survive it.

Excepting the Christmas special it’s been well over a year since Doctor Who graced our screens. Despite assurances that Who would continue as a fixture, the truth was that much of this latest run was filmed in 2016, but only begins broadcast now – running through April, May and into June (with the next Christmas special being filmed in July).

While The Pilot will likely not fall into an all-time beloved outing for the Time Lord, it is a savvy and effective reintroduction to the character and his universe, one that has a feeling of  having a checklist of things it wants to include…and does so by planting a series of ‘ticks’ in a series of bright and breezy boxes. There’s plenty for the party faithful here – easter eggs galore, some more obvious than others: pictures of River Song, grand-daughter Susan, glimpses of the Movellans (last seen decades ago) and discarded signage from the Mary Celeste- but there’s also so much of a ‘jumping on’ feeling throughout that it could almost serve as a wholesale revamp for a whole new incarnation (ironic as such a necessary intro and reboot is now less than a season away). It’s not that this isn’t a series obviously steeped in mythology, but ‘The Pilot‘, like the opening 2005  episode’Rose‘ feels like it has a ‘welcome mat’ mission statement running through every frame.

Though fun and welcome in some respects, the inclusion of the daleks feels somewhat opportunistic – the once genuinely frightening fascistic pepper-pots once again played more as a familiar, contractual punchline to an episodic joke than a real, terrifying logical threat that once cast such a large shadow. Contortionists will be able to fit in the dalek-laden promo trailer that introduced Bill several months ago, between the scenes on show as part of ‘The Pilot‘, but we are whisked along at such a pace that such seams are hardly noticeable.

Pearl Mackie is an engaging addition to the series – all at once fulfilling everything needed of a modern companion while still putting a fresh spin on things (her questions and statements tending to  zag when a zig could be expected). The Doctor says she caught his attention because when she didn’t understand something she smiled rather than frowned – and Mackie gives just the right sort of vibe to make that true. The fact that Bill is gay is something that sounds like a notable piece of marketing (though the press release claiming she’s the ‘first openly gay companion’ is somewhat misleading – one couldn’t move during the early years of Russell T. Davies’ administration without diversity being loud, proud and worn like a vibrant Blue Peter badge throughout). But it’s an element that the story doesn’t seek to dwell upon like a salacious tabloid. Yes, Bill is attracted to a girl called Heather, but the story would have worked out exactly the same if either Bill or Heather had been male or female and in that regard it’s great to see a story that embraces diversity by simply shrugging and moving forward rather than making a headline statement or pivoting around it.

Matt Lucas is a marmite performer: his comic creations often of the love or loathe variety, but though essentially being in the story as comic relief, Steven Moffat’s story gives Nardole a personality that we actually find ourselves wanting to see more of and perhaps develop – something that by all accounts we will see in the weeks to come.

After a slow and casual start aiming to gently draw us in to proceedings rather than clobber us around the head with action, the expected pieces start to come together.  Amid the de rigeur banter that has become a mainstay of modern Who, (and dutifully recorded as such by Nardole), there’s also genuine moments of pathos – the Doctor quietly and subtlely (for him) giving Bill a profoundly thoughtful Christmas gift – for which he doesn’t seek to take credit – and some genuine classic chills (a bathroom scene cranks up the tension of who/what’s behind the shower curtain).

As Capaldi’s tenure draws to a close and with serious questions about whether he’ll make it to the Christmas special intact, The Pilot reminds us of why Doctor Who is still fun – walking a fine line that seeks to embrace those from 7 to 70. On that level, this opening episode may paint its tale in some broad strokes, leaps of logic and a few gaps in narrative and doesn’t push at the boundaries too earnestly, but it is successful at reminding people why we hope it remains a staple of the schedules of family entertainment for a long time to come.