To call 'Arrival' an 'inaction' movie sounds like an insult, but its slow-burn story of language rather than lasers offers a deeper experience...

They do not appear to be an immediate threat but various governments begin to assemble their best and brightest to try and understand what is happening and why.  Respected linguist Louise Banks (Amy Adams) is visited by Colonel Weber (Forest Whittaker) who wants her to come and help with the initiative to communicate with the new arrivals within their ship. But Banks knows that ‘communicating’ with another species is not merely about rearranging letters and sounds, but more about context, cadence, inflection and tone…  there are so many different ways to interpret meaning within English, never mind a ‘language’ from beyond the stars.

As the world’s governments start to fracture with geographical distrust, each employing their own agendas and way of ‘speaking’ with their respective visitors, it becomes clear there are many ways to perceive the aliens message. Is it a plea for help, a warning, an offer or somewhere in between? Louise must work with theoretical physicist Ian Donnelly (Jeremy Renner) to keep some of the more trigger-happy members of the military at bay while desperately trying to find a way to understand and be understood.

Arrival arrived in cinemas last November  with a certain buzz attached to it… that this wasn’t going to be your average ‘alien encounter’ outing. That’s very true, though it’s easy to see why it quickly divided critics. There will be those who consider Arrival as ponderous and over long…and even if you enjoy it, you may concede they  have a point, as it largely depends on what you’re expecting. One of the advantages of a DVD release is that you probably have some ideas based on the theatrical release coverage.  If you’re looking for a ‘first contact’ film with explosions, laser beams and beating of patriotic chests then this is about as far as you can get away from that remit.  Close Encounters of the Third Kind took its sweet  time to get to Wyoming and its Devil’s Tower climax but even though we get a look at the alien visitors a lot earlier this latest outing, it does make CE3K look like a continuous adrenaline rush in comparison.

While Close Encounters… played with the idea of music as a galactic leveller, Arrival goes for words, or more accurately symbols. Say what you want about the film’s pacing – which admittedly suffers from a temporary lack of momentum about halfway through – but much thought and detail has been devoted to how a completely different language set-up would work and circles that look like coffee-cup stains haven’t had this kind of work-out since The Ring. The circular motif runs through other aspects of the film, like some kind of extra-terrestrial emoji -but it makes a nice change from the pseudo-Egyptian hieroglyphics that populate the more mainstream cinematic cosmos.

Equally the aliens themselves are shown with just enough mystery so that they walk the line between being too abstract abstract or coy , the audience needing to have the close-ish encounter they’ve been promised. They get that around a third of the way into the piece with a journey inside the alien vessel that defies gravity. There’s a similar approach in ‘look’ to the aliens environment seen in Torchwood: Children of Earth, with a screened off area between safe ‘climates’ and more of a suggestion of what’s lurking beyond. We see the outlines, forms and tendrils of the species without them ever coming quite into sharp focus. The encounters with the visiting race are enough to leave  a lot to the imagination, but without leaving us cheated.

Director Denis Villeneuve has produced solid work in the past few years – movies that have received critical acclaim ahead of decent if not stellar box-office . Prisoners was an under-rated study of grief and revenge surrounding the disappearance of a child and the lengths a group of parents go to bring the person they suspect to justice. The Oscar-nominated Sicario featured the reality of drug-enforcement on the US/Mexico border and was applauded for its bleached out and bleak look at a war being lost,and the people who still chose to fight for a variety of reasons. He’s currently in post-production on the much-discussed Blade Runner 2049.   Arrival is a softer film, a movie that’s less bleak in both palette and subject, almost as if Villeneuve was trying out another instrument to add to his existing repertoire. So far he’s amassing quite an orchestra.

Arrival will likely come to rest in the vicinity of other films such as Contact and Interstellar, but Nolan’s latter movie  felt sterile and pompous… wanting to be a profound statement on life, the universe and everything and a generic blockbuster… it eventually disappeared up its own black hole. Arrival, despite equal star power and some similar highbrow but handwavery conveniences, has a stronger conviction that its story and heart are strong enough to stand on their own merits even if takes longer to get there. It goes all-in with a quieter, more personal frame of reference and with an almost melodic pace and focus. The machinations of politicians and those with twitchier trigger-fingers flicker around the edges but they are the backdrop to the main story; there to occasionally punctuate the story and give urgency  in a similar way to the above-surface-tensions in James Cameron’s The Abyss.  While the ‘jocks’ are off in Hollywood, busy blowing things up and boasting about how big their jet-fighters are, this is a film about the nerds from the library – proving that science, history, reading and writing are just as dynamic a set of tools as an AK-47.

Likely to be the most ‘internal’ film about the wider universe you’ll have seen in quite some time, you’ll likely enjoy the experience but have no desire to see again. But its DVD release will hopefully bring it to an audience that missed out on its late 2016 release… and of course those Oscar nominations don’t hurt its future either…

Arrival is released onto DVD on February 14th 2017. 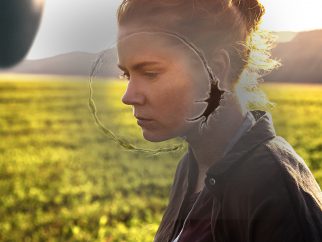