Stephen Strange (Benedict Cumberbatch) is that kind of doctor for whom the profession has brought riches, fame and more than a slight amount of arrogance.  Perhaps they are all well-deserved, but one night it is all snatched away when a terrible traffic accident on a mountain road badly injures the surgeon – the damage to his hands essentially cripples his career. With enough resources to search for ways to repair his hands, even Strange finds it hard-going – every surgeon he sees tells him the brutal truth that his career as a surgeon is over.

Desperate for even the slightest chance, he eventually finds himself in Nepal and heading to Kathmandu where one crippled man found salvation. But it is not what he expects and he soon finds himself on a very different road…. one that will make him reassess not just his priorities in life but the nature of life itself. He may never operate again, but a woman known only as ‘The Ancient One’  says his hands may yet contain a force for good. Thrust into a world of magic rather than science, Stephen Strange will have to quickly learn that despite his knowledge and talents there are still dangers beyond his understanding… and they have plans for Strange and the world itself…

With a swish of his cape, an arched eyebrow and a visual flourish, Marvel seem to have turned their products into gold once more…

Though this is the most overtly ‘magic’ of the Marvel movies to date, there’s certainly an argument to be made that it treats that magic in quite a scientific way: discussing rules, regulations, consequences and a discussion on the multiverse. La Ancient One compares Strange’s training to be a surgeon with what it will take to become a sorcerer – essentially the same as the secret to playing Carnegie Hall: ‘practice, practice, practice‘. This amounts to a mixture of lessons involving martial-arts, hand-waving and book-reading which sometimes makes the Kathmandu headquarters feel like Hogwarts East. The film is only two hours long, but even saying that, it does seem that Strange, albeit with humour and some false-starts, begins to master the basics faster than you can say ‘Muggle’.

The action, dominated by a visual-effects budget that must have eclipsed the stars’ collective salaries, largely delivers. It is telling that a modern, big-budget action movie can more concerned with mind-bending than gun-shooting (noteworthy that the only bullet in the whole enterprise is the one removed from a patient at the start of the film to show us Strange’s arrogance and skill). As seen in the trailers, spells and incantations cause the NYC city landscape (look out for the Avengers tower) to Rubik-Cube their way across the screen bringing back memories of Christopher Nolan’s Inception, though with far more fun and warmth.

For a film about magic, no divination can hide the fact that Cumberbatch’s American accent is a distraction for the first fifteen minutes. While it’s not dreadful, it’s so unusual to hear the actor break from his usual clipped British tones that you’re likely to be focusing on that rather than the action at the start. The comic-book character is American, but a la Patrick Stewart’s Charles Xavier over in the Fox branch of the Marvel Universe, one does wonder if it might have been a better choice to play him as a British import  – something that wouldn’t have truly affected any aspect of the story. Chiwetel Ejiofor is a talented but sometimes under-rated actor and gives us an earnest Mordo as a good, if conflicted ally and of whom we may learn more later. Mads Mikkelsen does best with Kaecilius, an adversary who is largely written as a formulaic bad-guy whatever his supposedly wider motivations in the moral landscape. Rachel McAdams (True Detective, Sherlock Holmes) does well enough in her limited role as Strange’s ex and fellow doctor, but she feels entirely surplus to story requirements in a throwaway role, ultimately proving far less significant than Natalie Portman’s Jane Foster in Thor or Gwyneth Paltrow in Iron Man.

It’s that latter film that Doctor Strange most resembles: the basic concept of a decent but arrogant man humbled by his own lack of self-awareness and set on a new path with an enlightened view of his place in the world – albeit it with the charismatic charm still firmly intact. In this case it’s not a wounded heart, but broken digits that act as the impetus. The fundamental differences between the solid world of mechanics and the ephemeral world of magic aside, it might well be interesting to see Stark and Strange interact in future movies with so many common traits to explore.

Despite car-crashes, life-and-death surgery and the fate of the world in its broken hands, the film is not one that takes itself too seriously – wisely making sure that a vast majority of the story is all-ages friendly. Despite some cosmic-acne to indicate evil (Kaecilius’s henchmen include the ever-reliable martial-artist and rising star Scott Adkins) and much wire-work martial-arts action mixed with CGI, there’s nothing here that would even give a nine year old nightmares. It’s presented with a knowing eye to the absurd, Strange himself initially scoffing at the potential mumbo-jumbo that he encounters before his training begins and some of the slapstick humour coming from a cloak that, once again, feels like something J K Rowling could have conjured.

It’s not perfect and nor does it push boundaries, but with two hours of action and post-credits sequences that tie it further into the Marvel universe (and perhaps give a clue to where a sequel may go) Doctor Strange still proves to be a smooth operator. 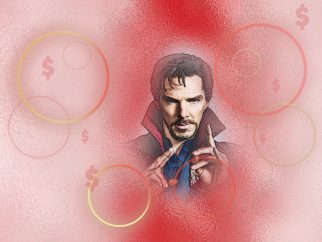