Ghosts in the Machine: Why you should tune in to ‘Frequency’…

Another of the season's timey-whiney dramas, 'Frequency' adapts the beloved 2000 sf drama for a 'CW' audience...

There's life in that old radio-ham set yet as 'Frequency' gets the tv treatment...
by admin 7th October 2016

Raimy Sullivan (Peyton List)  is a decorated detective, celebrating her twenty-eighth birthday and likely to be proposed to by her boyfriend. She loves her job, her fiancee and her mother dearly – the only thing that still haunts some of her moments is the knowledge that her late father was a dirty cop killed by his associates twenty years previously. When the ham-radio she and her father Frank (Riley Smith) played with as a child is found in a box and put back together she has mixed feelings and memories of a time she cannot hope to recapture.

Or can she..? A voice comes across the airwaves and it soon becomes clear it’s Frank Sullivan… but he’s broadcasting from the year 1996 – and twenty four hours before his own murder. At first neither Frank nor Raimy believe the identity of the other – it must surely be some cruel or even dangerous hoax. But it soon becomes clear from their intimate knowledge of their early family life that both are telling the truth – the radio is reaching across the years and somehow letting them make contact once more.

But can Raimy stop Frank’s murder and even if she can, what effects might that cause in the timeline. It soon becomes clear that even the fantastic opportunity fate and the universe has given her will come at a price…

Yet another in the list of cinema screen to television screen adaptations that are littering the schedules this season, Frequency brings with it both mixed expectations and huge possibilities. With some tweaks to the characters of the original film – but the premise mostly intact –  Frequency is the kind of episode you want to like before you’ve even seen a frame. The result is not quite as wonderful as you might have hoped, but it’s certainly far from the opportunistic spin-off disaster it could have been.

List and Company fit the CW template of ‘beautiful people with fantastical problems‘ and initially it’s hard to take her too seriously as an apparently seasoned detective. But the actor has a track record of making parts interesting (think recent roles in  The Tomorrow People reboot, The Flash and Mad Men) and while she looks young enough to still be a cadet, especially when constantly surrounded by older officers, the production allows her to be interesting, if only in reactive ways thus far. The series has to sell its premise quickly and though the majority of us wouldn’t buy a radio-ham voice (that’s the internet without pictures for you youngsters) claiming it was that of a impossible relative, we – and Raimy and Frank – are at least given enough persuasive elements to know something legitimately weird is going on. Riley Smith (previously best-known for True Blood and Nashville) may look like a refugee from an Ethan Hawke cosplay convention but makes an interesting choice as weathered undercover cop Frank, a man with flaws but who knows them well enough to have regrets – especially the cost it’s meant to his family. He protests his innocence to Raimy and we see from the way the new timeline develops that his original fate was not as clear-cut as she’d been led to believe.

The rules of the time-travel effect (information flow only, not people) seem straight-forward thus far: essentially there’s an exact, to the very second, twenty-year cause-and-effect difference (to stop changes happening immediately because original events will be changed later, if you understand that and can keep up) and Raimy is the only person who can remember simultaneous versions (which may mount up as she keeps changing things). This is another instance of having to ask whether the idea will work over multiple seasons or even an extended run of episodes. Certainly there’s room to explore the ripples and differences that meddling with the past can have (indeed, this might be an adaptation of 2000’s Frequency but its template may have to develop more towards the concepts of the 2004 Butterfly Effect to work well – notably a film that the original movie’s writer Toby Emmerich also produced). But there’s also the dangerous balancing act of becoming too complex or not interesting enough.

Less flashy that some other timey-whimey shows, much of the action is character driven rather than dominated by any major special effects. The one disappointing thing is the make-up department’s attempts to age certain supporting actors playing the same roles in two time periods. With the greatest respect, while Meki Phifer can pull it off, it requires a higher suspension of disbelief than the plot premise itself to be convinced that that Devin Kelley (born in 1986) could ever play Peyton List’s mother in the same scene when the actresses are merely months apart in actual age. A few grey hairs and crow’s feet for the 2016 scenes simply do not do the job necessary.

The original film was a little, often under-rated bittersweet gem (with Jim Caviezel and Dennis Quaid in the respective List and Smith parts and with Sullivan Snr. being a fireman, not a cop) and so the series comes with some in-built goodwill. For the moment, that may be enough – both leads are engaging and you quickly buy into the familial beats and strained relationship that is the beating pulse of Frequency. It’s not pushing any boundaries or reinventing the wheel. It’s probably not even making ham-radios cool again (though they were and are). But as a slice of wish-fulfillment sci-fi, it honours its source-code material and lays groundwork for more.

In a season dominated by time-trickery (think the far more formulaic Timeless, Legends of Tomorrow and even the switcheroo of This is Us), it feels as if Frequency is the one most invested in character development rather than the high-concept which frames it. It certainly has the best soundtrack. If it can avoid future-crime-of-the-week templates and stick with the intriguing idea of unintended consequences, it will likely improve its initial middling audience-share and ratings. 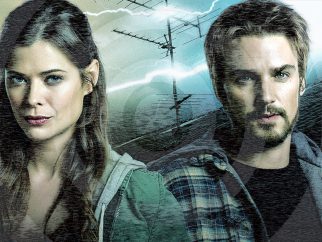