Hayley Atwell was a fan-favourite as 'Agent Carter' but 'Conviction' doesn't have the courage to give its lead the needed edge...

'Conviction' lacks the courage of such in ABC's new drama...
by admin 6th October 2016

Hayes Morrison (Haley Atwell) may be the daughter of an ex-President and possess the savvy mind of a great attorney but she’s also a self-destructive rebel and a magnate for self-inflicted trouble . But when she’s caught for cocaine-possession, she’s offered the deal of a lifetime. Due to a backroom deal between her parents and pragmatic and ambitious D.A. Conner Wallace ( Eddie Cahill), Hayes is given one way to avoid heading to jail… head-up a new legal team that will exam old, controversial cases for possible signs of a faulty verdict. Wallace thinks it will increase his popularity with the public and also provide political and personal leverage with the Morrison family.

But Hayes doesn’t like being blackmailed. At first she intends her rebellion will be to to merely get away with as little work as possible  – but then she realises it might serve herself AND the greater good to show everyone just how clever she and her new team can be… and that she’s no-one’s puppet. The problem, of course, is proving that.

While Conviction’s title plays to the ideas of possible imprisonment and of personal moral responsibility, there’s a certain degree of irony included in the fact that the new series doesn’t quite have the courage of such.

Hayley Atwell gives it her all. She’s a talented, engaging actor and most recently a fan-favourite for her title role in Marvel’s Agent Carter. The cancellation of that show wasn’t a direct result of Atwell’s casting in Conviction but it certainly helped usher Carter off-screen and so many wondered if this new show was worth the loss.

In a word, no.  Coming from the producers of Criminal Minds, it wasn’t unreasonable to think that the show might have at least some of the same edgy quality – not as dark, perhaps, but still a series able to take some risks with the idea of wrongful sentences. But the truth is that there are circles that are edgier and Sesame Street channel broadcasts that are more risqué.  For a show that begins with our star being thrown in jail for cocaine possession (the glamorous misdemeanor  that leaves her looking slightly ruffled in the way that Julia Roberts’ Pretty Woman was a poster-child for prostitution) the most eyebrow-raising the pilot gets after that is a glimpse of Atwell stripping down to her underwear to try on a dress. (Quickly, the smelling-salts, Mr Jarvis!)

The deal at the heart of the show lacks credibility in its execution, even with a healthy suspension of disbelief. It’s one thing to have a  person made to take a job they don’t want because of blackmail material and their own self-interests, it’s another thing entirely to believe the daughter of an ex-President could be arrested for drugs without every blogger and news outlet descending on the police station within minutes, never mind her being given a high profile job and scrutinised by the press mere hours later. Especially so when by the end of the pilot she’s admitted the truth such to half a dozen people and there’s plenty of people for whom the story leaking would benefit them.

Really? Could a more potentially blackmailable team have been put together to fight crime? It’s like the ‘Suicide Squad‘ of pen-pushers…

Still, far better shows have started off with conveniently absurd foundations, so ignoring the actual set-up, which is so detailed it happens before the opening credits, what of the opening story? Again, it’s riddled with clichés and broad-stroked plot-points that don’t make a lot of sense. For a concept centred around wrongful convictions, the story has to keep throwing inconvenient obstacles at the investigation that would otherwise have seen the accurate decision be a foregone conclusion back in the original trial. The CSI  team must be looking on in despair.

Perhaps the team assembled for the new unit are too busy dealing with their own secrets. After forty-four minutes of  not very dramatic drama we book-end the pilot with a montage of formal revelations about  Hayes’ staff that are dealt with as speedily as the opening  set-up, almost as an afterthought by someone who drew random quirks and foibles out of a hat.  Emily Kinney (best known as The Walking Dead’s Beth) is Tess, the ingénue trying to redeem a past mistake; Manny Montana’s  Frankie is an ex-con trying to go straight and keep other secrets hidden; Shawn Ashmore’s  legal-wiz Sam is the man passed over for leadership by Hayes’ drafting and Merrin Dungey’s past in the police-force may be open to question. Really? Could a more potentially blackmailable team have been put together to fight crime? It’s like the Suicide Squad of pen-pushers.

Assembled like an Ikea cabinet that looks good in the brochure but ultimately comes lacking a key screw or brace, Conviction has all the gloss but nothing of the heart it tries to wear on its sleeve. To work as well as the concept could ever have done, Hayes would have to have a ‘House’-like lack of caring for social interaction to back up her supposed brilliance.  Yes, Hayes is given the snark and the style but none of the substance (except substance-abuse). It’s impossible to buy Atwell’s Hayes as a reckless agitant when even the most modest inner conflict has her eyes moistening up before each ad-break. Agent Carter would be so disappointed in her lack of genuine spunk beyond the scripted words.

Diabolically ordinary rather than criminally mindful, Conviction feels like a show plucked from a pile of dismissed pilots from a decade ago and overturned on appeal to fit its leading lady. It doesn’t do her or the audience any favours and one can’t help feeling the jury won’t be out for long.

Conviction is currently broadcast in the US by ABC on Monday nights and will begin on Sky Living in the UK in November. 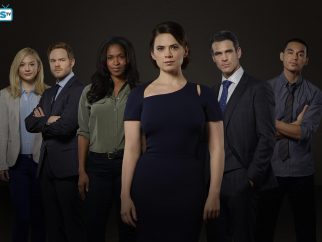 Ghosts in the Machine: Why you should tune in to ‘Frequency’…