Think of it as Lewis Carroll meets the X-Men - and a match made in Wonderland for the cult director and the quirky family thriller...

All through his young life, Jake (Asa Butterfield) has listened in awe to the tales his grandfather, Abe (Terrence Stamp), told of his youth… of monsters real and metaphorical and of the strange people he met. However age has taken its toll and it now appears that Abe cannot fully look after himself. Fearing for his safety after an hurried phone-call, Jake rushes to Abe’s Floridian home, only to find it a mess and Abe’s eyeless body in the woods beyond. Something else lurks in the woods  – watching and waiting.

But even in death, Abe has left Jake a legacy beyond the stories and in an effort to deal with his grandfather’s death and to fulfill a final promise, Jake heads to a small island off the coast of Wales and finds out that Miss Peregrine’s Home for Peculiar Children is a real place – or was until it was destroyed during a bombing raid in 1943. But time may be an illusion – lunchtime doubly so – and Jake’s arrival on the island has not gone unnoticed or unexpected. Both Abe’s allies and his enemies now find their fates intertwined. Time is… peculiar and can be rewritten – but at what cost, even to those with very special gifts..?

Delivering a modern and timeless fairytale that works on a variety of levels, director Tim Burton (who has already given us intriguing reality-bending takes on Batman, Planet of the Apes, The Nightmare before Christmas, Big Fish and Alice in Wonderland)  strikes many of the right notes in his latest project, the result being that rare result: a movie that can entertain the entire family and though existing fans of his work may presume they know what to expect, this mixture of fantasy, science-fiction, time-travel and feeling like an outsider, comes together in a way that may surprise long-term followers. It’s essentially a love story, but one filled with rules, obstacles and the delights of possible impossibilities.

‘Peculiar…‘ is Burton’s best film in a considerable while. As with many masters of the absurd, he’s often best when restrained just a little rather than scurrying into visually-stunning but self-indulgent alleyways. Of course, many of Burton’s films are visually arresting and intriguing, but this may be the first one to be considered ‘bright’ and ‘beautiful’.

That being said, despite the many things to recommend it, Miss Peregrine’s Home for Peculiar Children, though an awfully big and entertaining adventure, isn’t an entirely flawless masterpiece – those familiar with Ransom Riggs’ book (inspired by genuine vintage photographs) will note the differences and those unfamiliar with it may find themselves confused by the exact dynamics of the ‘loops’ beyond the singular Welsh variety. There’s certainly been a ‘Hollywood make-over’ of the climactic battle which admittedly gives the holiday town of Blackpool the attention normally reserved by big studio features for the likes of London and New York.

There’s been some controversy in recent weeks regarding the lack of racial diversity in the film (Samuel L. Jackson as bad guy Barron is essentially the only only black actor in the production and Burton’s films are not known for featuring many ethnic minorities). Though there’s certainly a discussion to be had about the industry’s attitude to race representation – and Burton perhaps not helping himself with misjudged comments on ‘tokenism’ – it would be wrong to hit the film too hard with this objection. Judged by what is on screen, rather than what could have been, it still stands up well.

The main-casting is excellent. Asa Butterfield (Hugo, Ender’s Game) is the central hub of the story and he holds his own with an array of veteran performers such as Terrence Stamp (as Jake’s grandfather) and Jackson. Eva Green walks the line between high camp and vamp and though it’s tempting to picture Burton’s ex-wife and muse Helena Bonham Carter perfectly fitting the role, Green clearly projects having some guilty pleasures and naughty fun with a sparkle in her eye that belies her prim exterior. Jackson, happy to take roles in which he can play as ‘large’ as he wants, eats the scenery with some finely sharpened teeth. Alison Janney and Rupert Everett appear in minor roles but have to make the most of little screen-time within the grander landscape. The appearance of Dame Judi Dench, though welcome, also feels like little more than an opportunistic afterthought and Chris O’Dowd, often the funniest thing in off-beat comedies, has little to do here except struggle with an American accent.

However, the Peculiar children are talents to watch with a host of possible breakthrough roles including Ella Purcell as lighter-than-air Emma, Lauren McCristie as firebrand Olive and Finlay Macmillan as the obstinate Enoch –  all characters about whom you instantly want to know more.

‘Peculiar…’ is Burton’s best film in a considerable while. As with many masters of the absurd, he’s often best when restrained just a little rather than scurrying into visually-stunning but self-indulgent alleyways. Of course, many of Burton’s films are visually arresting and intriguing, but this may be the first one to be considered ‘bright’ and ‘beautiful’.

The Peculiars’ home feels fully-realised and initially safe, not dangerous and later, underwater scenes are quite breath-taking (pun-intended) to behold. Yes, there are moments of pure Burtonesque gothicness within the running time (most noticeably in the bizarre and violent puppets Enoch creates to show his powers to Jake) but they don’t dominate in the way they’ve sometimes done in his other work. Instead there’s a literal lightness and ambiance to this adaptation that defies the Burton back-catalogue of the hollow and maudlin. Much of the film is imbued with a sense of whimsy that Terry Gilliam might appreciate and feels like a chaotic counterpane of Alice in Wonderland, Harry Potter, Burton’s own Big Fish (with its embellished tales of wonder) The X-Men (First Class‘ Jane Goodman wrote the Peculiar... screenplay) with a whole barrage of other time-travel and magical memes as influences.

For much of its running time (a manageable two hours or so) the film is a delightful mix of cogs and intricate wheels within wheels that tick along nicely like a magical pocketwatch. If it ultimately ends up attempting to package expectations with some much broader strokes and far vaguer details, then that decision to ‘go big’ doesn’t spoil the actual journey of getting there.

This is a delightful outing, suitable in the most part for family-viewing but with enough genuine darkness and monster-filled scares that children should be advised to decide whether their parents can handle it. 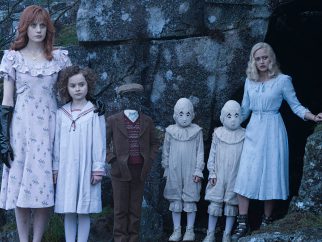 Hail to the Chief: Sutherland is back to save America (and primetime)…