Walking and talking without the Sorkin. But 'Madam Secretary' gives a solid gloss to the Powers that Be 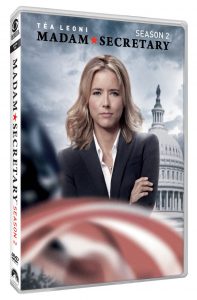 It’s not difficult to imagine the original pitch for Madam Secretary… essentially “We want the West Wing, but… y’know… with more action!’ In many ways, that potentially uncomfortable mix has worked better than expected with both elements  receiving a fair amount of play in the now sophomore CBS show.

Much of the intrigue comes from the halls of power where Tea Leoni’s Elizabeth McCord continues to battle not just the international challenges of the job  – Terrorists! Assassinations! Kidnappings! – but also the Washington machinations of those who continue to hope she fails spectacularly in her eponymous position.

There are times when the more overt and soapy aspects feel they could submerge the deeper political drama; the traditional network notion is that the wider audience wants to see angst and emotion and guns and war rather than people involved in actual nuanced negotiations. The show seeks to balance the domestic with the international – and not just on the terror front – this is the 21st century and any multifaceted drama looks to show how people cope on many levels. Elizabeth and husband Henry (Tim Daly) find themselves working together on certain projects but having to keep secrets from each other on different levels – always a nice recipe for drama at home and office.

No, it’s not as slickly walky-talky as Aaron Sorkin’s landmark efforts, but its cast – the sometimes under-rated Leoni ably supported by the likes of Daly, Keith Carradine,  the prolific and talented Zeljko Ivanek and Bebe Neuwirth) are good

But that’s not to say that the series – particularly in an American election year, doesn’t realise the sheer value of watching people jostle for power and influence in a game where the stakes are individual and global. No, it’s not as slickly walky-talky as Aaron Sorkin’s landmark efforts, but its cast – the sometimes under-rated Leoni ably supported by the likes of Daly, Keith Carradine,  the prolific and talented Zeljko Ivanek and Bebe Neuwirth) are good.

There are genuine surprises along the way. In the Season two opener, with the President’s plane missing-in-action for several tense hours, McCord must take the Oath of Office on a temporary level, leading to escalated pressure, the ‘hacking’ of Air Force One creates an agenda that underscores much of the first half of the latest run and and without spoiling it, the eventual season finale offers a job in jeopardy’ arc with a certain twist that many won’t have seen coming.

If viewers feel that Madam Secretary lacks some of the specific gravity of The West Wing, that’s a fair comment, but as a guilty-pleasure in a crazy and ‘stranger-than-fiction’political climate and with a solid team both behind and in front of the camera, it continues to be a formidable addition to the schedules.

Madam Secretary: The Second Season DVD Box-Set is now available through CBD-DVD in the US